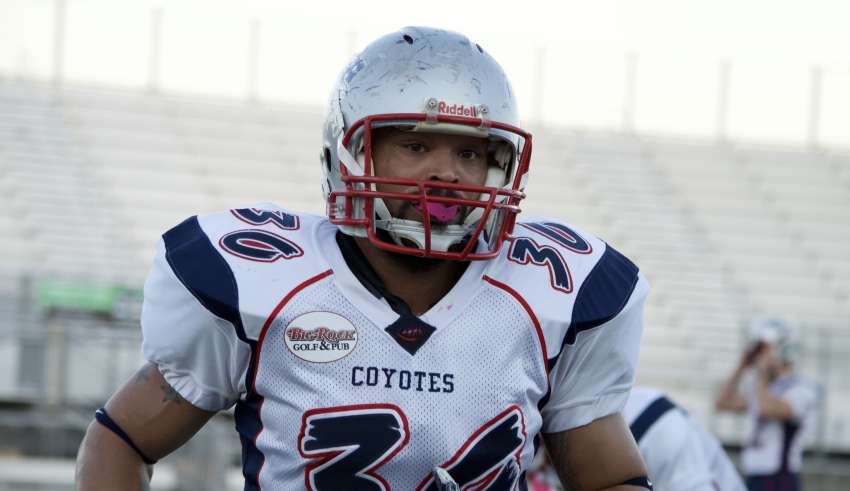 Linebacker Will Hoglund has become the soul of the 'Darkside Defense'

(INDIO) – On August 22, the six-time champion SoCal Coyotes will open training camp for the 12th time at their Shadow Hills facility, where they have trained, practiced and played since 2015.

When the team hits two-a-days, which the veterans ‘affectionately’ call the “Coyote Crucible,” only the strong survive in temperatures that predictably soar well above 100 degrees. Hall of Fame head coach J David Miller will get his first look at the Class of 2019, who will be asked to defend the Coyotes’ 2018 Pacific Coast Championship in Developmental Football International (DFI).

But prior to the first whistle, and the impact from a promising rookie roster of fresh young blood, we asked the coaching staff a controversial question, one that is certain to create debate: Who are the 10 Most Indispensable Coyotes on America’s #1 Developmental Pro Football Program™?

To clarify, we defined that the word ‘indispensable’ implies not only talent and ability, but also how the team will be affected if the player misses time. Another major consideration is how vital each player is to the Coyotes’ success in 2019.

Rookies will read this and insist they plan to change the order by opening day, September 14. Regardless, here’s how it looks heading into camp.

10. Kicker Luis Castellanos — Castellanos brought back instant consistency and credibility to the Coyote kicking game, something the Coyotes hadn’t enjoyed since the retirement of the legendary Dan Kelly in 2017. And Castellanos wasn’t just good – he was great. The College of the Desert product hit on nine of 10 field goals, with six over 30 yards, and one from 45. He was perfect on PATs during the regular season (18/18), and as a punter, averaged 42.9 yards. Most of all, he earned the confidence of teammates, who were relieved to have a reliable leg that could flip the field – or line up and win it. Don’t be surprised to see Miller send out Castellanos up to 60 yards – he has the leg, and the accuracy.

9. ‘Mr. Everything’ Joel Felix — Felix has steadily improved since his rookie year in 2016, and coaches predict 2019 will be his breakout season. Felix is intelligent, a sound route runner, and fearless over the middle. He also plays special teams, and plays both ways – a must with DFI’s 35-man roster limits. Felix is also a devastating downfield blocker – a lost art in the modern game. Off the field, he’s exactly what Miller wants in every player – a man of character, a disciplined role model, and a dependable citizen. Felix also owns and operates Category 5 Training, which led to a player-coach appointment to handle the Coyotes’ conditioning program. Felix means so many things to the Coyotes in so many ways that his indispensable quotient puts him in the Top 10.

8. Receiver who emerges not named Rashad Roberts — Maybe this is trusted veteran slotback ‘Preacher’ Ross Robertson. Maybe it’s returning veteran Derek “DA” Anderson. Maybe it’s College of the Desert rookie Tyius Evans. Bottom line is the door is wide open. Robertson and Anderson both put up several 100-yard games last season, but are chasing consistency with high expectations – and a full season from quarterback Michael Karls. Time will tell. But whoever it turns out to be is going to be significant because that receiver will give Karls another legitimate target outside of Roberts, so opposing teams can’t just eliminate Roberts with double teams. So whether it’s Robertson, Anderson or Evans, whoever becomes that threat, their importance and indispensability factor will rise.

7. Linebacker Will Hoglund -A walk-on in 2014, Hoglund has become the soul of the Coyotes and the brains of the defensive backfield. There aren’t many players in the league who can play as many roles on the defense as this battle-tested warrior. “Hog” can play in the box, selflessly stuff the run, beat up a slot, put a hand down on the defensive line, split out wide or even step back at strong safety. He has the speed to cover receivers in the flat, tight ends at the second level, or collapse on backs coming out of the backfield. And he still performs all of those roles at the highest level. Lose him, and it’s hard to plug in another player on the roster who can fill the void. Last season, he had 16 tackles for loss, one pick and 12 passes defensed – and scored a game-breaking touchdown. He’s one of head coach J David Miller’s favorite players – and it’s easy to see why. And did we mention Hoglund never blames, complains or makes excuses, and leads by example on and off the field?

6. Offensive tackle Jonathan Zazueta — The Mexican Mafia doesn’t provide better protection than the veteran Zazueta, who returns for his 12th Coyote season. With quarterback Michael Karls returning from a knee injury, it’s imperative the Coyotes have an offensive line that’s going to keep him upright and prevent blindside hits in particular. Zazueta has mastered Run ‘n’ Shoot blocking schemes, and has protected the best signal-callers in Coyote history with no evidence of decline. The wily veteran matches his 330-pounds of brawn with brains, and last year Zazueta played so well he earned outrageous praise from coaches and teammates alike. A defensive tackle in college, Zazueta occasionally rotates in to support the d-line, and in limited spells, makes his case that he can still dominate in three-technique. If Zazueta went down, it would create upheaval not just on the Coyotes o-line, but team chemistry. His dominant, selfless play and leadership make him a critical cog in the Coyote machine.

5. RB / LB Jordan Warford— Defensively, Warford, in his fourth season, has become a leader in the front-seven, no matter where he lines up. A passionate on-field communicator for the defense, Warford has the versatility to play traditional linebacker on the inside, and also can line up on the edge and rush the passer. He’s dropped weight, so it might be a precursor to him being moved to a more permanent role out on the edge. Whatever the position, he has a knack for making huge, difference-making plays in the biggest games. Warford also was a two-way player in college, and last year begged to get a few reps at running back. Coaches finally gave in, and Warford shocked everyone by taking over games from the ‘S’ position, averaging five yards a carry with some of the most punishing runs in franchise history. This presents a ‘high-class problem’ this season to Coyote coaches, who must decide when and where to split his game time to get the dynamic splash plays this athlete creates on both sides of the ball.

4. Offensive lineman Seung Jun Oh — A pure technician, native South Korean Seung Jun Oh arguably is the best offensive lineman in Coyotes history. Jun Oh sniffed the NFL with the Cleveland Browns and New York Giants, barely missing his ultimate life goal from the most unlikely of circumstances. His numbers certainly tell a story: Max bench 455 pounds, max squat 635, max power cleans 350, and a 40-yard dash time of 5.5. Jun Oh has played every o-line position but center for the Coyotes, and all of them extraordinarly well. In the passing game, he shoots his hands quickly and sits on power rushers. The former academic standout at North Carolina Central is too smart for blitzes and stunts, and exhibits unreal upper-body strength to torque and turn defenders. The most mobile Coyote lineman, Jun Oh can reach and seal from the backside, and adjust in space at the second level. In his free time, “Big Sushi” is also a heavyweight national judo champion and owns a sports management business. A popular speaker and camp leader, Jun Oh’s work ethic, professionalism and elite performances make him a Coyote force that’s indispensable.

3. Defensive end Jake Sheffield — Impossible to overstate Sheffield’s impact since joining the Coyotes in 2014. “Playing against Jake Sheffield,” says Coach Miller, “is like running through a tiger compound wearing a meat suit.” Indeed. Unstoppable off the edge, Sheffield breaks his own Coyotes’ all-time sack record (86) each time he drags another quarterback to the turf. This dominant Arizona State star is a treat to watch – and a must-see for any serious young player. His fundamentals – angles, leverage, pad level, get-off, feet – are the best in the business. Sheffield is extraordinarily disruptive – he must be double-teamed every snap, which forces teams to game plan against him and creates unlimited opportunities for his defensive teammates. As long as the Coyotes seal the opposite side, Sheffield will shed blocks and viciously pursue down the line of scrimmage. Last year, he provided most of the pass rush both from the outside and inside, making splash plays when the Coyotes needed him most. His 12 sacks, 22 hits on quarterbacks and 44 pressures were all team highs. He also forced two game-changing fumbles, and recovered one himself for a touchdown. Sheffield’s level of play is critical for the Coyotes defense. A team captain, this U.S. Marine also lives his life with unimpeachable character, another huge plus in Miller’s playbook.

2. Wide Receiver Rashad ‘The Franchise’ Roberts — Roberts is the best – and most selfless – Coyote to ever don the silver, red and blue. You can bet all eyes will be on his one-on-one training camp matchups against newly acquired Seattle Seahawks ‘Legion of Boom’ cornerback Jeremy Lane. Across his storied Coyote career, Roberts has 343 receptions for 6,493 yards and 98 touchdowns, a ridiculous 18.9 yards-per-catch average. Six times he has ended games with walk-off touchdowns, including a 32-yard score in 2016 that preserved the Coyotes perfect 7-0 undefeated season. Roberts holds 16 Coyote records, most in franchise history. Roberts has been a catalyst in the Coyotes’ six championships, and is one of the few remaining players from the team’s inception in 2012. His 9,418 total yards from scrimmage and 116 total touchdowns are also franchise records. Over his 11 seasons, Roberts also has 1,712 yards and 12 TDs passing/rushing, and another 1,224 yards and six touchdowns as a KR/PR. Coach Miller nicknamed Roberts ‘The Franchise’ during his rookie year in 2012, when the Atlanta native led the Coyotes on a dazzling nine-game win streak that earned the team’s first title. “He IS ‘The Franchise’,” Miller said, after a local newscaster asked what Roberts meant to the Coyote organization. The nickname stuck, and Roberts made it prophecy.

1. Quarterback Michael Karls — The loss of Karls to a knee injury in Week One last year spun the Coyotes season into a tumultuous wild ride. Offensive ineptitude almost certainly cost the ‘Yotes two games. The Run ‘n’ Shoot is a timing affair that relies on quick reads, ball placement and a commander-in-chief with a quick trigger. Karls is a 2015 league MVP who owns nine franchise records, among them 16 consecutive 300-yard games. He has pinpoint accuracy, and his 62-percent career completion percentage is second in franchise history. Only one player has ever had a better touchdown-interception ratio. A full season with a healthy Karls under center automatically punches the Coyotes’ playoff ticket. The other problem is depth – in developmental football, no QB wants to sit, which predictably makes it hard to find an adequate back-up. The drop-off between Karls and and another quarterback is precipitous, which makes him that much more indispensable to the Coyotes. Throw in Karls’ character, leadership, and command of the offense – he’s also the offensive coordinator at Xavier College Prep – and it’s an understatement that the Coyotes’ ‘Silver Stretch’ offense is a ghost of itself without him.