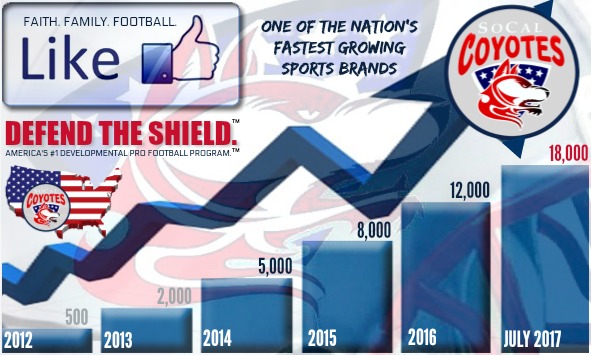 By comparison, the St. Lucie Mets, the new home of celebrity slugger Tim Tebow, have 11,274. The Star, the 91-acre campus that hosts the world headquarters of the Dallas Cowboys in Frisco, has 17,041.

Entering their fifth year and 10th season with a formidable national footprint, the Coyotes will enjoy live game coverage this fall on ESPN Radio 103.9.

The Coyotes anchor the Pacific Coast Division of the World Developmental Football League, and open play September 2 at their Shadow Hills home against the California Sharks.

The Coyotes finished 2016 undefeated and were the only team in the entire state of California ranked in the nation’s Top 20. The organization has meticulously built dominant national brands now synonymous with ‘Faith, Family & Football,’ and other trademarks such as ‘Building Champions, Building Men™,’ and ‘Defend the Shield™.’