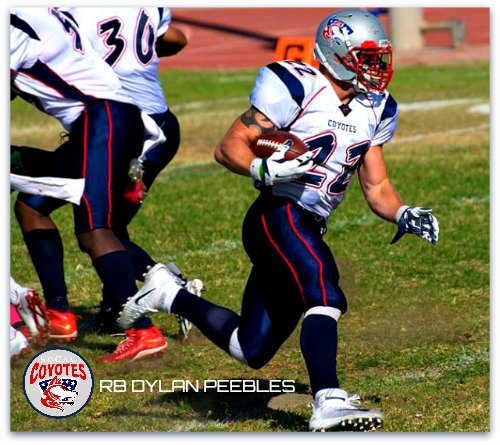 (INDIO) – Former Cortland State All-American running back Dylan Peebles – who averaged 8.7 yards a carry in 2016 while leading the SoCal Coyotes in rushing with 656 yards on 75 carries – has re-signed with the team, America’s #1 Developmental Football Program™ announced today.

Peebles, 6-0, 225, helped lead the Coyotes to an undefeated 2016 season, and used his rookie Coyote game film as currency. He signed first with the Cleveland Gladiators of the Arena Football League, and spent a mini-camp with the CFL’s Sasketchewan Roughriders.

“It’s humbling to run 4.4 in two countries and still miss by an inch,” Peebles joked. “In Cleveland, every guy there had NFL experience. It’s humbling to be told you’re barely not good enough – yet. But it’s also gracious of the SoCal Coyotes players and organization to accept me back into the pack. You learn a lot in the desert on those Coyote practice fields. Mostly what it takes to be a pro. It’s definitely a place to get your mind right and your heart right.

“The Coyotes introduced me to faith, and it’s carried me through some very difficult spots,” Peebles added. “The Coyotes give you that opportunity to rep it out every day. There’s no better place in America to get game-ready and life-ready. I’m headed back to Indio to become a better player, grow my faith and improve daily as a man. It’s a privilege to be a Coyote and keep maturing in all those departments.”

Peebles joins a Coyote team that opens September 2 at their Shadow Hills home against the California Sharks. The Coyotes anchor the Pacific Coast Division of the World Developmental Football League, which has 32 teams in six countries.

ABOUT THE SOCAL COYOTES –