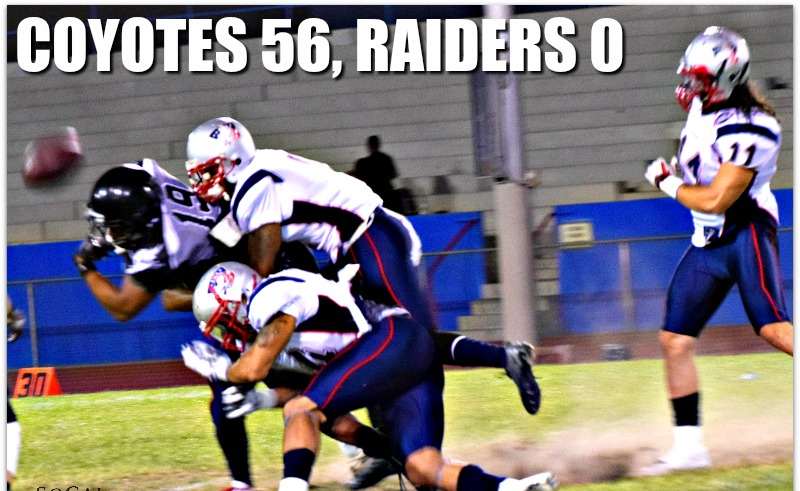 (INDIO) – The California Raiders, who ducked the four-time champion SoCal Coyotes in January 2016 after both teams finished as champions of separate leagues, and both were ranked number-one in various national polls, paid the price Saturday night in a 56-0 drubbing that easily could have been much worse.

Not so the Raiders. Despite having six months to prepare for the Coyotes after both teams joined the Southern California Football League, the Raiders still showed up unprepared and short-handed.

To start the third quarter, the Raiders demanded a running clock in the second half. The Coyotes vicious ‘Darkside Defense’ – led by three sacks, three tackles for loss and three solo stops from defensive end and NFL prospect Kwame Bell – simply destroyed them, holding the hapless Raiders to literally zero total yards from scrimmage.

Offensively, the rookie Coyote ‘Triplets’ led the way. All-American running back Dylan Peebles rushed 16 times for 136 yards and three touchdowns. All-American slotback Jarrod Harrington had over 200 return yards and scored on a 16-yard pitch and catch. All-American quarterback Jacob Russell was nearly perfect, completing 26 of 309 to nine different receivers for 311 yards, three touchdowns and no interceptions.

“They had six months to prepare – it’s not like we sneak up on anybody,” said a frustrated Coyotes head coach J David Miller, who had his disciplined team honed for a shootout that never materialized.

“We joined this league to play the best teams possible. You can’t ring our doorbell and run. This is a young, hungry football team. They’ll chase you down the street.”

The Coyotes are now 2-0 in league play, and travel September 10 to play the undefeated San Diego Nighthawks (2-0) at 5 p.m.

WIN BIG, EAT BIG – ROUNDTABLE PIZZA rewards Coyote fans after big victories. If the Coyotes win by 30 or more, show your game ticket for big discounts on any size pizza.