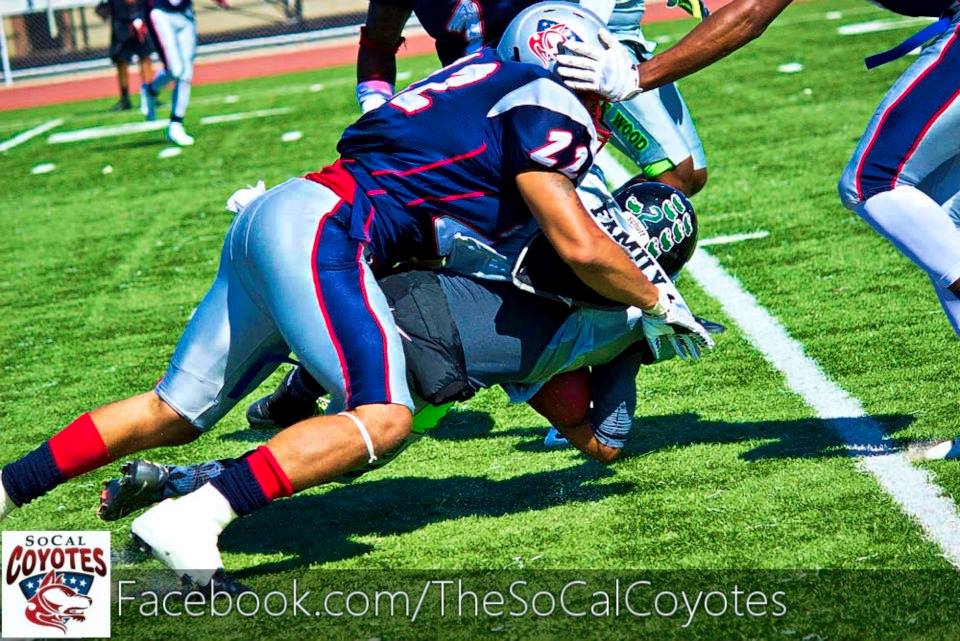 That’s been linebacker Robert Caldwell’s middle name since he first donned a helmet and buckled a chin strap.

Now, on his journey back to the National Football League, Caldwell — who spent rookie camp with the Cleveland Browns — doesn’t flinch at the 10-hour round-trip drives to greater Palm Springs and beyond to get work — and national recognition — with the AAA SoCal Coyotes.

Robert and his talented teammates on the ‘Darkside Defense’ will be back in action Saturday at 3 p.m., when the two-time champion Coyotes return from a three-week bye to face the arch-rival San Diego Thunder at Anza’s Hamilton High School.

“I’m grateful for this opportunity,” says Caldwell, a devastating 6-3, 250-pound North Carolina State product, who led the Wolfpack in 2013 with 105 tackles and 15.5 tackles for loss.

“To succeed at this game, you have to be capable of following your passion, be prepared to work hard and sacrifice, and, above all, don’t let anyone limit your dreams.”

Caldwell, considered one of the nation’s best young linebackers who led all tacklers in January’s College All-Star Bowl, has quickly demonstrated to Coyotes opponents that he is an exceptional physical specimen.

In the attacking scheme favored by assistant head coach and defensive coordinator Shane Helms, Caldwell might be required to line up at the line of scrimmage, as a traditional linebacker, or in coverage. He’s at his best when he’s in open space, allowing him to rely on his athleticism and closing speed.

Many of his countless Coyote splash plays have come as a pass rusher at the line of scrimmage, where he’s also demonstrated ridiculous strength in effortlessly shedding blockers.

“His combination of length, first-step quickness and straight-line speed gives him the tools to be an impact player off the edge,” says head coach J David Miller. “No question, Robert will get another shot in the NFL.”

Coach Helms agrees. “Like all of our players, he’s getting invaluable game experience,” he says. “Few players have as much room for growth as Robert. He’s a phenomenal athlete, He could play multiple spots across multiple schemes in the NFL.

“He’s listed at outside linebacker here because of his ability to make plays away from the line of scrimmage, but he’s a playmaker everywhere.”

In addition to being one of the Coyotes leading tacklers, Cowdin — also an NFL prospect — is a successful businessman and entrepreneur, whose gym targets not just budding pro athletes — but week-day warriors who need weight loss, muscle building or a sound fitness formula.

Cowdin, 6-2, 225, was a first-team all-conference selection at College of the Desert before playing at Oregon State and Utah State. Cowdin helped COD advance to the Beach Bowl in 2011, and was heavily recruited by UCLA, Iowa State, South Florida and Miami (Fla).

In recent months, the Utah State graduate has trained a number of NFL prospects, including Coyote teammates Shaine Boyle (Arizona Cardinals), Caldwell (Cleveland Browns) and an array of other NFL Combine players. College prospects flock to his gym to build their bodies into full-scholarship material, where Cowdin emphasizes not just lean strength, but speed.

Both are his trademark on any given weekend with the nationally renowned Coyotes, as the hair-flying, no-denying Cowdin chases down quarterbacks and stuffs running backs with NFL-worthy efforts. Scouts describe him as “a young Clay Matthews … an ascending player who is just scratching the surface of his potential.”

Mention the name Cade Cowdin in any football, business or fitness arena, and “you’ll immediately discover why people want him as a trainer, a player, a coach or a mentor,” says Coach Miller. “His drive and desire is insatiable, and contagious. Cade is a respected professional, in every sense of the word.”

IF YOU’RE COMING TO SATURDAY’S GAME, make sure Caldwell and Cowdin are on your ‘must-have’ autograph list, as these two Coyote superstars are destined for greatness.

SATURDAY’S GAME WILL BE BROADCAST live around the globe on KXPS Team 1010 (www.team1010.com, click ‘listen live’), as well as on the Coyote Mobile ‘Yapp,’ available free in iTunes or Android Market (by searching So Cal Coyotes). Kickoff is scheduled for 3 p.m. at Anza’s Hamilton High School (see events on this page).