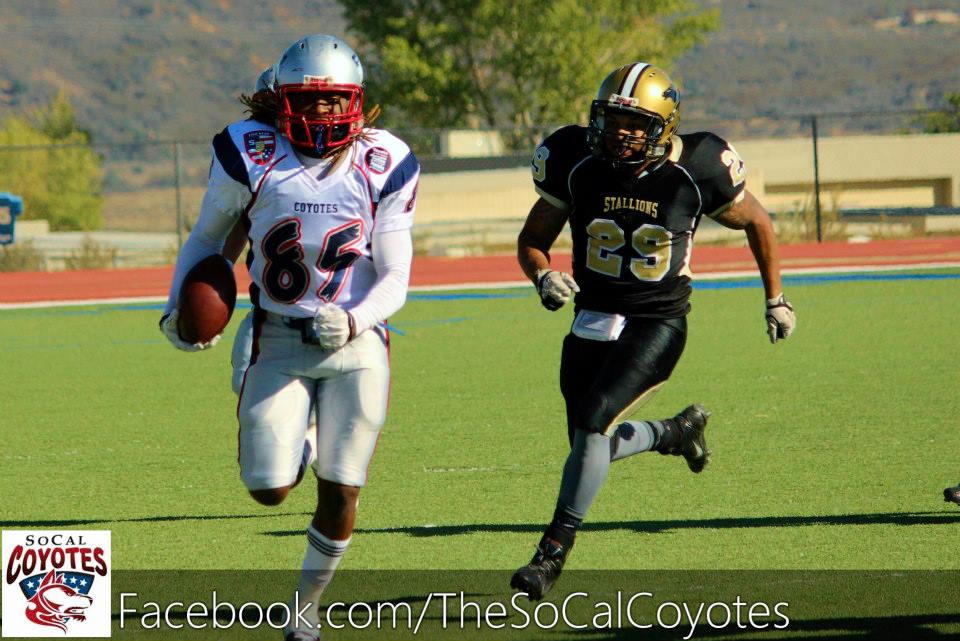 Saturday night, “Just Mike” directed the Coyotes to scores on 10 of 11 possessions, completed passes to seven different receivers for 483 yards and nine touchdowns, and ran for another – as the Run ‘n’ Shoot ‘Silver Stretch’ offense exploded for 598 yards total offense and an 82-25 victory over the bewildered San Diego Stallions.

The win propelled the Coyotes to 5-1 in the nation’s top-ranked LaBelle Community Football League, and set the stage for this weekend’s showdown at the undefeated Las Vegas Trojans (6-0), which will shape the LCFL playoff picture with three games to play.

The 82-point assault was a franchise record, along with Karls’ nine passing touchdowns and his 10 total touchdowns, which broke his own record of seven – set last week. The ‘Darkside Defense,’ suddenly living in the shadow of the offense for the first time this fall, still made its voice heard with six turnovers that fed the team’s Silver Stretch attack.

Karls, a true rookie who set most of Midlands University single-season records last fall, now has 19 touchdowns passing in four games, and two rushing, for a total of 21, in his fourth consecutive start in replace of injured Coyote legend Nate Lewis.

The Stallions bracketed and banjo-covered Rashad “The Franchise” Roberts, the team’s all-time leading receiver, moved their best corner around in the slot against DeMario “The President” Brown and James “The Human Highlight Film” Calhoun, and manned up 6’2” Stevie “Wonder Dog” Will on the outside.

They forgot about slotback Billy Eichmann, another rookie who starred last year for Point University and played in the Senior Bowl. The 6-1, 200-pound Eichmann – himself frequently compared to Wes Welker — ripped the San Diego defense with eight catches for 160 yards and three scores of 36, 16 and eight yards.

Series after series, Karls calmly and methodically dismembered a fundamentally sound and resilient Stallions team that came to play – but had no answer for page after page from the Coyotes Run ‘n’ Shoot playbook, authored by legendary team consultant Mouse Davis, godfather of the modern pro offense.

“After Billy got going, everything else opened up,” said Karls. “He was like Wes Welker out there, just shredding the seams, the flats, the screens, and he kind of shocked them that he can run with the football, then truck guys and get in the end zone. That was a perfect example of what Mouse (Davis) means when he says we hold the chalk last.”

Indeed. Coyote receivers swirled all over the field, and the patient – and elusive – Karls found them all. Stevie Will added another eight catches for 101 yards and a touchdown. James “The Human Highlight Film” Calhoun had three catches for 80 yards and two touchdowns, including a 64-yard dagger on a brilliant 90 Switch that was the long ball of the day.

Demario Brown had two catches for 55 yards and a 33-yard touchdown, while Rashad “The Franchise” Roberts had two catches — and two touchdowns, including a groin-popping slant-fade that Karls placed perfectly into his outstretched hands.

S-back Andre Hunt had two catches for 63 yards, in addition to his five carries for 48 yards, for an average of 9.8 yards a carry.

The stunned Stallions fought valiantly, and early in the game, knotted the score 13-13 at the end of the first quarter. But the relentless Coyotes put on a textbook Run ‘n’ Shoot clinic that culminated with a torrential 27-point fourth quarter.

The Stallions blitzed, and Karls either ran for first downs or picked them apart with screens and draws. San Diego fell back into zones, the Coyotes gashed them on the ground. On one possession, the Stallions finally had the Coyotes stopped and facing a third and 19. Karls dropped to throw, was nearly sacked, then out-ran a herd of frustrated Stallions for a 26-yard touchdown.

THE DARKSIDE DEFENSE was anchored by veteran All-American Bo Bovain and former Coyote Defensive Player of the Year Cedric Cox. Along with sophomore Ryan Pervine, the elder Coyotes kept the rookies saddled with leadership, and the unit produced six turnovers, including interceptions from rookie linebacker Jeremiah Spicer and rookie defensive back Kris Vereen.

FS Anthony Spencer, who has blossomed into a quiet assassin, was dominant, while rookie defensive end Javonte Brown continues to be the surprise of the season. Vereen – blitzing untouched off the edge — ended the game on its final play with a thunderous sack on the Stallions quarterback.

TWO-WAY PLAYER LERON WILSON was the wake-up call for the Coyotes when the score was tied early in the game. His booming hits on special teams ignited the slumbering Coyotes, and his play on defense sparked everyone around him. A week ago, he was the team’s leading rusher, but was moved back to defense when running back Andre Hunt returned from injury. “His selfless play personifies the ‘Coyote Way,’” said assistant head coach and defensive coordinator Shane Helms.

WR STEVIE WILL GAVE THE GAME BALL TO THE OFFENSIVE LINE, and declared the game ‘their victory,’ as Coyote players whistled and cheered for a unit led by veterans Juan Mayen, Johnathan Zazueta, Andrew Dueber and Cedric Cox.

THE COYOTES HONORED MOUSE DAVIS by running a specific, seldom-used play from the 1984 USFL Houston Gamblers playbook they had practiced all week — a reverse option to Rashad “The Franchise” Roberts that went for a two-point conversion. The Coyotes, of course, called the play ‘Gambler.’ As the ‘Franchise’ crossed the goal line, he dropped to a knee, pointed skyward and mouthed the words, ‘Thank you Mouse!’ Davis, who lives in Portland, texted Coyote coaches immediately after the game with two simple words: ‘GREAT JOB.’

CHRISTENED AMERICA’S #1 DEVELOPMENTAL FOOTBALL TEAM in the preseason by The Football Educator, the Coyotes continue to prove it, with rookie after rookie starting for resting or injured veterans. The Coyotes posted their highest-scoring output in history without the help of superstars Devin Jones, Shaine Boyle, Robert Caldwell, Kelvin Cain, Cade Cowdin, Jake Sheffield, Devin Howard and Nate Lewis, to name only a few.

“Once again, we were in school out there today, with a lot of youth on both sides of the ball,” smiled head coach J David Miller. “Today was a great day to get those Huggies off. We’re in the playoff hunt, and romper room is over. We’re growing up, and I’m extremely proud of every one of my young men.”

THE 82 POINTS WERE THE Coyotes highest scoring production since a 76-0 victory over the Los Angeles Hilltoppers on October 1, 2013, at Xavier College Prep.

THE COYOTES PLAY THEIR NEXT HOME GAME on Sunday, November 3, at 3 p.m., against the Los Angeles Hilltoppers at Anza’s Hamilton High School. Pending the LCFL playoff pairings, it may be the Coyotes last home game of 2014.

FOR A COMPLETE RUNDOWN of the Coyotes remaining schedule, visit www.thesocalcoyotes.com and click ‘schedule.’