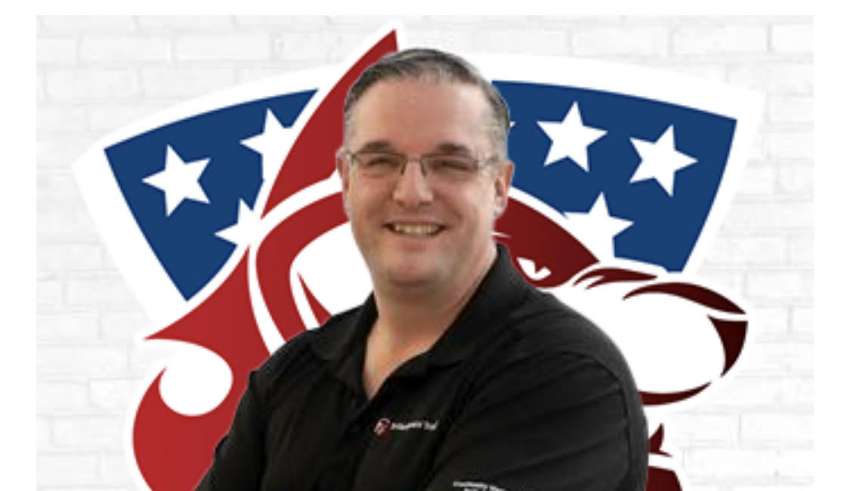 The 43-year-old Jenkins, who is widely respected by peers around the globe, will be formally introduced to the media and other league teams on February 5, when Developmental Football International (DFI) holds its spring league meeting at the Mountain View Grille at Desert Princess.

DFI, which has partnered with the LDFL for 2022, kicks off its season March 5. The Coyotes host San Diego at 1 p.m.

The Legacy of  Beloved ‘Coach C’.

Jenkins replaces the much-loved Dr. Robert L. “Coach C” Cummings Sr., who over the past decade helped lead the Coyotes to national prominence – and was the heartbeat of the elite team’s powerful faith-based culture.

An integral part of SoCal’s six championships, ‘Coach C’ informed the Coyotes last year that he would step down in 2022 as AD, but remain with the organization as both board member and chaplain.

“You don’t replace a legend like Coach C – you build upon his legacy,” said Coyotes’ nonprofit founder and head coach J David Miller. “Coach C has invested nine years creating our ‘Coyote Culture,’ which has set the standard for this level of the sport.

“To fill this position, we needed someone with a tenacious passion for the development of young people, a compassionate heart for our community, and finally, someone who not only could assume that mantle of leadership, but also add a global perspective.

“Call in the dogs, put out the fire – the hunt’s over,” smiled Coach Miller. “Damian Jenkins is uniquely qualified for this role. We’re pleased to announce he has accepted the position of Athletic Director with the SoCal Coyotes.”

“Together, we are going to focus on growing the Coyote Culture — while being open and transparent,” Jenkins said. “We will lead the department with clear principles, ethics, morality and compliance, while influencing our young athletes to take advantage of the opportunities the Coyotes provide for them to be the best version of themselves.”

“We are confident that Damian’s commitment to our athletes’  success, integrity, and innovation will continue to increase their accomplishments, cement an inclusive and equitable culture, and position Coyote Football as a premier destination for developmental players, who want creativity and excellence.”

“Carol and I are honored to formally be joining the Coyotes,” said Jenkins of his bride, the former Carol Joy Smoot. A loving father of two boys, Gavyn (13), and Iestyn (11); and three daughters Jacklyn (33), Madison (23) and Brooklyn (7), Damian personifies the ‘Faith, Family, Football’ mantra of the Coyote brand.

“I have incredible respect and admiration for both Coach Miller and Coach Cummings, as well as General Manager Scott Alvarez, SVP Ron DiGrandi, and all of the talented coaches and staff,” Jenkins said. ‘We look forward to being a part of the Coyotes’ longstanding tradition of excellence, and expanding their ministry and outreach around the world.”

Since 2018, Jenkins also has served on the Board of Directors for Desert Arc, where he’s now in his third year as board president. For the past 60 years, the nonprofit Desert Arc has been providing opportunities for people with disabilities. In addition, Damian is an Ambassador for the Greater Coachella Valley Chamber of Commerce and is Co-Chair of the Community Associations Institute (CAI), and Coachella Valley Education Committee.

Jenkins is known for his keen focus on strategy, structure,  and culture, which he has utilized around the world to deliver break-through results.

Mr. Jenkins has been with The Management Trust since August 2018. In his new role with the Coyotes, he brings a formidable history of senior management diversity, inclusion, and achievement – and an equally powerful international resume.

Mr. Jenkins’ international fingerprint includes the industry’s highest awards, such as Forbes 5 star, and AAA 5 Diamond across several properties. In 2007, he earned the coveted DEPA Middle East Hotelier of the Year Award in Dubai.

Damian has worked with, for and partnered with some of the industry’s biggest names. He has led and successfully operated celebrity branded restaurants within The Ritz-Carlton LLC, including Spago by Wolfgang Puck; John Elway’s Steakhouses across Colorado; and Celebrity Chef Gaston Acurio’s Restaurant in the Middle East.

It was the Ritz-Carlton Rancho Mirage that brought him to the desert. For four years, Jenkins served in a unique dual-management role as both Director of Food and Beverage – and as General Manager of The Edge Steakhouse. He was plucked from the Ritz-Carlton by The Management Trust, the only 100-percent employee-owned community association management firm in the nation.

A proud and patriotic Welshman, Mr. Jenkins hails from Britain’s smallest city – St. David’s, in Pembrokeshire in West Wales, United Kingdom. During his time in his home country, he starred in rugby for his local Club in St. David’s. He was promoted to play for Pembrokeshire County XV, and selected again to play for the Welsh Districts Select XV.

Damian also played for his University 1st XV, and played for a developmental Welsh Club located in South Wales near Swansea. During his time at University, he also achieved his Rugby Coaching Certification with the Welsh Rugby Union (WRU).

Jenkins holds a Bachelor of Arts in Leisure, Tourism and Recreation Management; a Higher National Diploma in Leisure Studies from the University of Wales, Trinity Saint David in Swansea, South Wales; and General National Vocational Qualification in Leisure and Tourism Certified by LCGI – Licentiateship of the City and Guilds Institution of London.

(CATHEDRAL CITY) – “We’re bringin’ nasty back.” The words of…