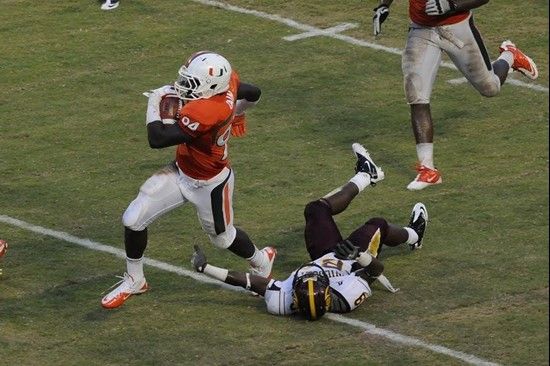 The words of head coach and non-profit founder J David Miller said it all after the six-time champion SoCal Coyotes came to terms with former University of Miami Hurricane and veteran defensive lineman/linebacker Kelvin Cain, who in previous stints with America’s #1 Developmental Pro Football Program led the team in tackles for loss (TFLs), pass knock-downs, and quarterback pressures.

The signing sent a message down-roster to returning Coyotes.

“The return of Kelvin gives us four dominant defensive players who are just ridiculous athletes,” said Coach Miller. “Kelvin is a finisher, and a destroyer – he has a combination of power and unbelievable speed, either in coverage or off the edge. He’s a player who can take over a game.”

In addition to leading the Coyotes to championships, in college, Cain had a 59-yard TD interception return against Bethune-Cookman as a Miami junior. The Miami letterman had breakout games against 12th-ranked Florida and a comeback win over North Carolina. As a junior, he had a season-high six solo tackles against Boston College. His career-high was nine solo tackles against Duke as a freshman.

“To return to the Coyotes means everything for me at this point in my career,” Cain said.

“It’s a blessing to have Kelvin back,” Coach Miller said. “He makes a difference everywhere he places his feet.”

A warrior on the field – off the field, Cain was an early cornerstone of the Coyotes’ ‘Above the Line’ program, where he shared his personal story of faith, hope and redemption to thousands of kids throughout the Coachella Valley.

“Until you’ve had the taste of finishing something incredibly difficult, you will not respect yourself,” Cain told packed assemblies.

The NFL prospect often recounted a promise he made to his mother to finish every grade of school, including college, and earn his degree.

“My mom struggled,” Cain said, “but she never quit. She kept food on our table, clothes on our back, and she raised us with values and morals. And on Mother’s Day my senior year, I was able to give something to her. I was blessed to walk down that aisle and graduate from the University of Miami, and live up to my promise and finish what I started.”

“Everybody can give their mom the same gift,” Cain said. “But are you willing to stay focused, work extremely hard, choose good friends, and take advantage of every opportunity? There is no greater feeling, after you’ve followed through, with tears, with struggles, with pain … you must fight on, no matter the circumstances, until you finish.”