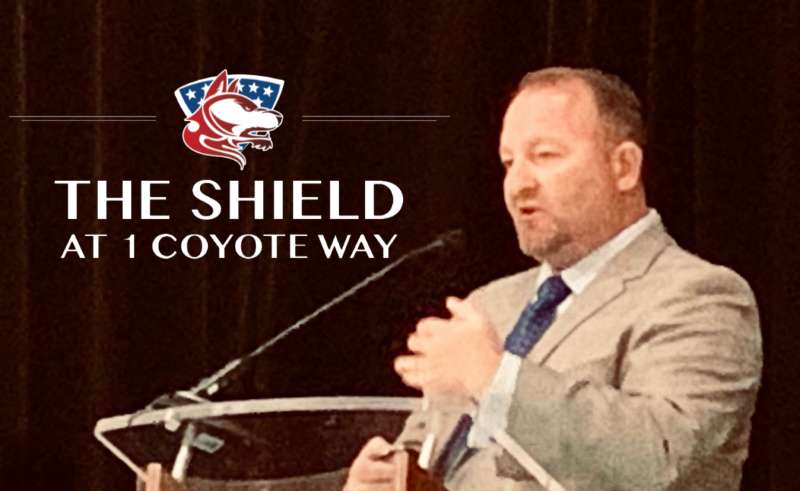 The appointment of Dr. Wehrli is one of several public senior-level moves by CSESA that continue to indicate the two-year-old corporation is inching closer to an announcement on The Shield at 1 Coyote Way, a multi-purpose faith, sports, entertainment and medical campus planned for the 125 acres of prime I-10 frontage between Cook and Washington.

Officials have been careful about releasing a start date since the venture was announced last year. But continued activity between CSESA and the H.N. & Frances C. Berger Foundation, a CSESA partner which owns the land, has heightened expectations that an announcement is imminent. Plans are in the works for The Shield Sports Medicine Institute, a multidisciplinary program that provides care for athletes from around the world.

Dr. Wehrli, a board member of the non-profit Coyotes organization who has served the team since fall 2013, is known as an architect of innovative approaches to foot and ankle care. He has built an international reputation for exceptional patient care and effective treatment solutions, and is the founder of the high-volume Coachella Valley Foot and Ankle Institute in Rancho Mirage.

“Dr. Wehrli is an equally distinguished medical pioneer and senior-level executive,” said CSESA chairman and Coyotes non-profit founder J David Miller. “Nobody has a better grasp of credentialing, licensing, Stark law or compliance. He’s both a brilliant entrepreneur and an industrialist – few people command so much respect on both sides of the ledger.

“After an extensive search, we discovered that the leader we coveted was already here.”

Certainly, Dr. Wehrli’s advancement of health care in the Coachella Valley speaks for itself. He worked at Desert Regional Medical Center’s Institute of Clinical Orthopedics and Neurosciences (ICON), where he specialized in minimally invasive sports procedures, including the revolutionary arthroscopic Brostrom-Gould procedure for ankle ligament ruptures and instability. At Eisenhower Medical Center, he ranks among the nation’s top surgeons.

As an entrepreneur, Dr. Wehrli delivered on his idea of a wound-care center for DRMC, and the company to manage it. After seeing a void for reproducible outcomes for bunionectomies, he designed a plating system and modified a ‘team technique’ that revolutionized bunion repair. Trilliant Surgical, an international, state-of-the-art medical equipment manufacturer, brought Dr. Wehrli’s product to market.

In addition to his practice, Dr. Wehrli lectures and trains doctors around the nation for Stryker Orthopedics, Trilliant, and the Musculoskeletal Transplant Foundation. He has presented research at national conferences, and currently leads breakthrough research that will be submitted for publication in high-impact, peer-review journals.

Dr. Wehrli then went through a highly competitive foot and ankle surgical residency at the nationally renowned Detroit Medical Center through Wayne State University in Michigan. Shortly after completing his educational requirements, Dr. Wehrli went on to become board-certified by the American Board of Foot and Ankle Surgery.

Throughout his career, Dr. Wehrli has held several prestigious positions focusing on new-and-improved approaches to foot and ankle treatment.

Because of his athletic background, Dr. Wehrli has a passion for athletes. He played major college baseball on scholarship at Brigham Young University and at Idaho State University. In high school, he was a three-sport star in wrestling, baseball and football, and was named “U.S. Marine Corps Athlete of the Year.”

Coachella Sports & Entertainment Stadium Authority LLC specializes in marketing, funding, media, licensing and branding, and works with an array of sports organizations, entertainment conglomerates, schools and institutions. It owns, manages, operates, partners and commercially represents memorable events that influence every facet of modern culture, with a focus on family values. CSESA is the master developer, operator and manager of The Shield at 1 Coyote Way®.

The Shield is expected to employ over 2,500 desert residents across an array of pro sports, technology, entertainment, medical and broadcasting platforms. Plans include a 14,000-seat indoor, air-conditioned stadium for pro, college and high school sports. Once fully operational, The Shield is projected to pump an anticipated $1 billion into the local economy every 10 years, while generating an additional $250 million in taxes in that span.