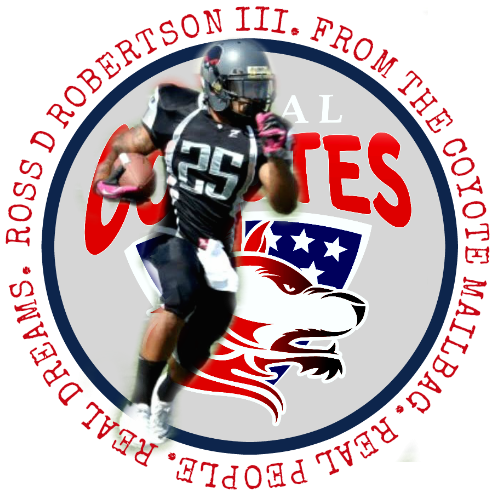 (INDIO) – Before you can walk on water, you first have to leave the safety of the boat.

In a letter this week to the Coyote Mailbag, 2017 rookie slotback and SoCal Coyotes prospect Ross D. Robertson III bared his soul. Fresh out of Arizona Christian University, Robertson just completed his tenure as a Community Relations intern for the NFL’s Arizona Cardinals – and is ready to hone his faith, family and football with America’s #1 Developmental Pro Football Program™.

Scouts put Robertson on the Coyotes radar after a series of impressive workouts, and he’s aware such talent will be required to earn a roster spot with the perennial champions, who open their World Developmental Football League season September 2 at Shadow Hills.

Robertson – who once attended a Coyotes game at age 18 – is just as eager to put his NFL Play 60 and Heads Up experience to work for the Coyotes off-field youth leadership programs. After signing his Coyote contract this week, Robertson fired off this powerful letter to the organization. The following is in Robertson’s own words.

”’PRAY AND ASK GOD what really is important, then have the courage to build your life around His answer.’ That’s been something I’ve recently learned going through my football journey, and just life overall.

“WHEN I RECEIVED THE opportunity to become a Community Relations Intern within the Arizona Cardinals organization, I was able have an impact within the community, while building my personal walk with God. We were all built to serve others, and I live for this. If I can be involved somehow to help change or redirect one child’s life, if just one child or teenager listens, then I’m right where God wants me to be.

“SERVING AS A MEMBER of the USA Heads Up Football and NFL Play 60 programs allowed me to take my experience and create a positive impact towards the children directly and indirectly involved in the programs. Recently I spoke to a youth football team about ‘not giving up on your dream.’ Being a smaller athlete my entire life, there were always those who wanted me to fail or quit because of my size. I took that as an opportunity to work that much harder, train better, educate myself in all aspects of fitness and nutrition. I used it as motivation to even earn my National Counsel for Certified Personal Trainers Certification.

“I AM STARVING FOR THE OPPORTUNITY to make the Coyotes, not just for me, but for all the little guys, the young people who were and are constantly told what they cannot do, instead of encouraged to pursue their dreams. Participating in all the events of the Arizona Cardinals and affiliate organizations brought such great responsibility because we were constantly in the public eye. I felt great responsibility with every autograph and picture I took with kids and their families. I can remember in particular when I was drawn to a young boy with Autism. First he wanted my autograph, then he wanted my hat, then he wanted my shirt. I gave it all to him. Later I would learn from his parents that I was the first to ever show him any attention, and that moment changed his life. Trust me, it changed me, too.

“THE COMMUNITY IMPACT of the SoCal Coyotes is how I want my adult life to be aligned. That’s what I enjoyed most about the Arizona Cardinals Organization. The SoCal Coyotes are focused on community, and built on Faith, Family, and Football. That’s enough for me as a young man.

“I STILL HAVE TO MAKE THE TEAM. So I’ll stop here. But I’ll close with this. A dream ‘is’ something. A vision ‘does’ something. A dream ‘is a place to be.’ A vision ‘is a place to go.’ A vision to me must be structured, intentional, enduring and rooted in daily living – not just mere wishful thinking. Nothing is more expensive than a missed opportunity. I’m stepping out on faith. No more doubt. Doubt kills more dreams than failure.

“EVER SINCE the early age of about six or seven, I have always had a love for football. I have been following the SoCal Coyotes since I was 18 years old. I’m blessed to now say that I’m a part of the SoCal Coyotes Organization.”