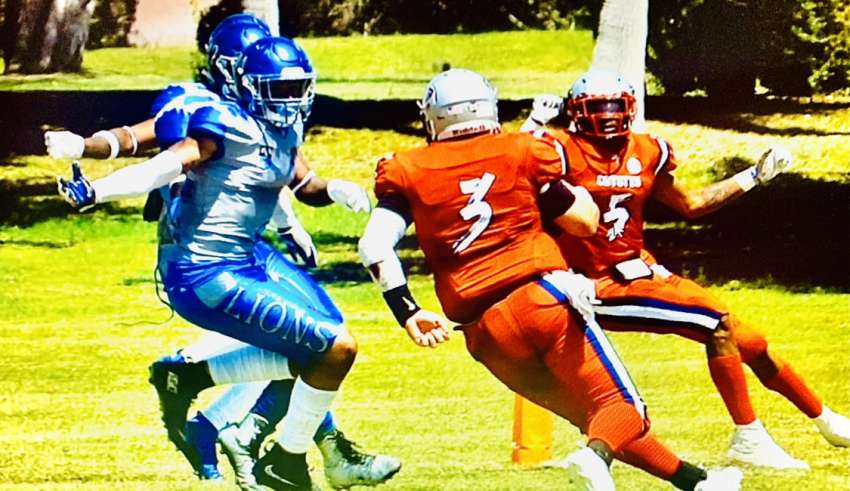 (RANCHO MIRAGE) – Quarterback Michael Karls threw five touchdowns to four different receivers and ran for a sixth to lead the maturing six-time champion SoCal Coyotes (5-1) to a 38-22 victory over the West Coast Lions.

“Perception and potential are the roommates of losers,'” said SoCal Hall of Fame head coach J David Miller. “You only win with perseverance and performance. Today you witnessed 34 rookies on this squad who are swiftly learning the difference.”

All afternoon, the Coyotes harassed Lions’ quarterback Justin Gunn. The Liberty University product had been the leading passer in the Southern California Conference of the Gridiron Developmental Football League (GDFL) – until he found himself in the teeth of the Coyote defense.

The ‘Darkside Defense’ sacked Gunn four times, forced him to fumble twice, and picked him off another four times. Gunn’s first five series ended in either interceptions, fumbles, or turnover on downs. 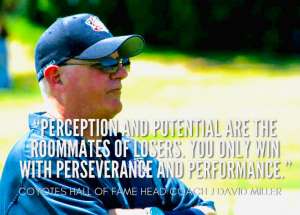 Meanwhile, his Coyote counterpart Michael Karls was a lesson in patience, and courage. Karls capped SoCal’s first drive when he scored on a keeper from seven yards out to put the Coyotes’ ‘Silver Stretch’ offense on the board.

SoCal immediately capitalized on another Gunn interception with a 40-yard rope from Karls to Kevin Johnson down the left sideline.

After multiple defensive stops, the Coyotes’ Robert Taylor sliced the Lions’ secondary for another first-half score.

The Coyotes finally opened up late in the second half. Karls – who repeatedly stood tall in the pocket – found Johnson again with a 22-yard dart late in the third.

“We don’t care much for celebrity quarterbacks,” Miller said. “We like battlefield commanders, and that’s what Karls gave us today.”

Another fierce defensive stand by the ‘Darkside’ gave the ball back to the red-hot Karls, who wasted little time extending the lead with a six-yard shot to slotback Kavan Buggs.

‘The Franchise’ Rashad Roberts put the game out of reach on the next offensive series.

The Coyotes’ all-time scoring leader split the Lions’ safeties for a Karls’ fastball in traffic – then shrugged off two tacklers and sprinted into the end zone for the 120th touchdown of his storied SoCal career.

‘There is winning, and there is misery, so today was a huge milestone,” said Miller, whose team notched his 94th career win at the Coyote helm.  “Individuals may win a game or two, but teams win championships.

“We’re not great yet, but we’re ringing the doorbell.”