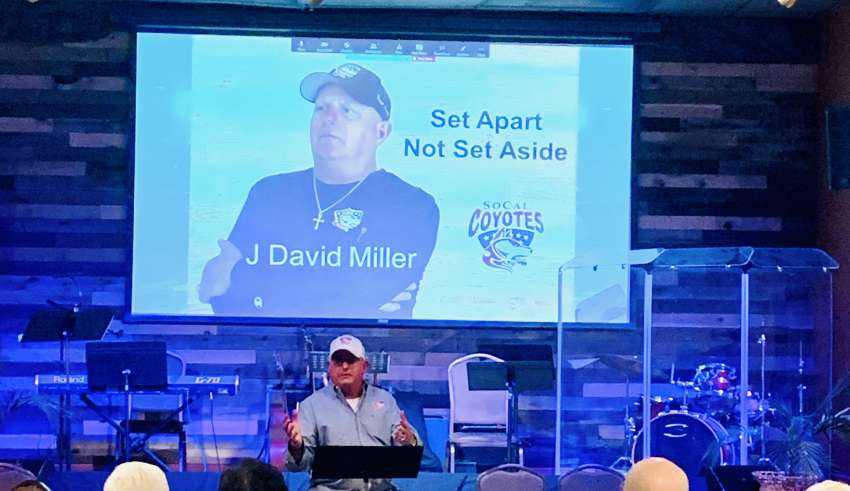 (PALM DESERT, Ca.) – Anyone can sing when the sun is shining, but a testimony of faith galvanized in hardship resonates loudest in the lives around us.

Those were the words of SoCal Coyotes’ Hall of Fame head coach J David Miller, who offered a personal message of hope to a packed men’s prayer breakfast this week at Desert Springs Church.

“Sometimes you feel backed into a corner,” said Coach Miller, who is also chairman of Coachella Sports & Entertainment Stadium Authority (CSESA), and founder of the Coyotes’ non-profit organization.

“Sometimes, we may think God has forgotten us,” he added. “But if we hang on, we will see God’s power at work – and out of our brokenness will come the fragrance of Christ Himself.”

Teaching from verses 8-9 of 2 Corinthians chapter 4, Coach Miller outlined the Apostle Paul’s four statements that describe how Christians should respond to faith under fire, in the trials of life:

“We all can relate to Paul, because those four images tell us he was a hard-headed realist, with no romantic illusions about his service for God,” the coach explained.

“Far from depicting himself as a spiritual superhero blazing a trail of success like a comet, Paul identified as a groggy fighter reeling from a succession of near-lethal blows – and surprised himself to still be standing, only by the grace of God.”

The door of opportunity swings on the hinge of opposition – so buckle up, said Miller.

“Unfortunately, life isn’t floating down a Disney ride like ‘Pirates of the Caribbean,’ where danger only appears imminent but no one gets hurt,” Coach Miller said. “Life is a full-contact sport. But a journey of faith comes with God’s promise that we are set apart, not set aside. We are never left alone. Even when we are rejected, hated, mocked, ridiculed and vilified, the Lord Jesus is right in the fight alongside us.

“We may be knocked down, but we are not knocked out.”

Al Hurt, Director of Men’s Ministry at Desert Springs Church, closed out the morning with prayer, and thanked the Coyotes for their ‘game-changing’ faith-based, joint-venture initiatives with CSESA.

“Coach has such a passion to serve God, and to serve others,” he said. “It inspires and unifies our men. We are blessed by his vision and leadership. We are excited for what the future holds in the Coachella Valley to collaborate with the Coach and the Coyotes.”