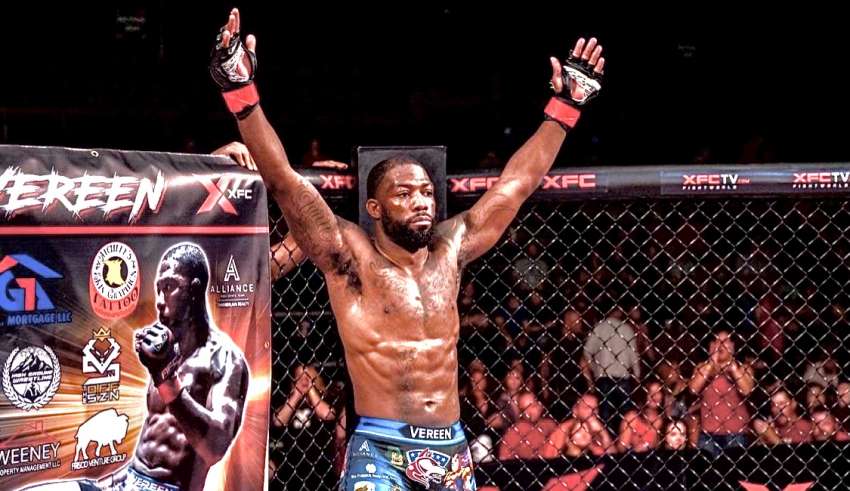 (OKLAHOMA CITY) – When undefeated MMA prospect and former SoCal Coyotes safety Kris Vereen (5-0) fights veteran grappler Tyrone Paige here on June 19, he definitely won’t be alone when he steps back into the cage to ‘Defend the Shield.’

“My faith in God and my love for my family is what keeps me going,” says Vereen, who is enjoying a meteoric rise as a welterweight mixed-martial-arts contender. “Without God, I’m nothing, I’m lost. My family is my ‘why’ and ‘what’ that keeps me fighting.”

‘Team Vereen’ is the first sports entity outside of The SoCal Coyotes licensed to wear the organization’s brand, notably the Coyote Shield, which stands for God and family.

“The mission of The SoCal Coyotes is to grow young men who impact communities through faith- and family-based leadership,” said Coyotes head coach and founder J David Miller.

“Kris Vereen is a dynamic young leader who checks every box. He is a young man who every father would like to see his son grow up to be.”

Vereen was a star defensive back out of East Central University in Oklahoma when Coach Miller invited him to California in 2014, the same year the Coyotes were named America’s #1 Developmental Pro Football Program by NFL executives.

“I was just a nervous, scared young kid from Oklahoma, going out to one of the most competitive states in the nation to play,” he recalls. “Little did I know I was going to learn the true meaning of faith, family and football.”

Vereen personified leadership during his Coyote tenure. He spoke in schools, sharing his story and encouraging thousands of youth to live a life that is skillful, intentional, on-purpose and driven. He volunteered at the Galilee Center, helping fulfill the needs of the underprivileged and disadvantaged, affirming their dignity with love, compassion and respect.

A hard-hitting defensive back, Vereen capped his Coyote career as a member of the first-ever undefeated team, when SoCal took home the 2015 spring championship in what is now Developmental Football International (DFI).

Vereen graduated from the Coyotes to the Indoor Football League – and for the first time, started using MMA as part of his training regimen.

“Kris Vereen demonstrates what the SoCal Coyotes are really all about,” says Dr. Wehrli. “Kris has taken what he learned here, and applied it to who he is today.”

“Kris is walking proof of a young man who learns from every situation, grows through every circumstance, and uses all of it to ready himself for his next opportunity,” Coach Miller says.

After his first Arena season, Vereen realized his athletic desire was shifting. “In the beginning, I actually never wanted to step in a cage or on a mat to compete – I just wanted the cardio and the training,” he says. “But as I kept training harder and harder, I suddenly realized I could transition into a great fighter. Before I knew it, I was in love with it.”

That transition from football to MMA was hardly easy. Where he once had relied on strength, physicality, aggression and brute force to make splash plays, Vereen learned that success in the cage required remarkable patience, self-control and mental acuity.

“I’ve had to overcome so much – it’s unreal,” he says. “In the combat sports world, adversity comes a dime of dozen. If you’re not good at overcoming adversity, you’re not made for this sport, point-blank, period.”

Vereen had opponents not make weight or drop out the day of fights, which cost him paydays. He’s seen grown men quit in the final seconds before making their ring walk to the cage. He lost friends who didn’t believe in his dream.

But for all those who hung in there with him – “I’ve made a personal vow to make everyone who believes in me very proud of me,” he says.

Smart decisions remain a staple of Vereen’s life, and career. He has managed his MMA fight-game opportunities carefully, both in selection of promotions, managers and opponents.

Vereen resisted the urge to go headlong into his new sport, too fast, too soon. His game plan has paid off with a perfect record, rising stock in national MMA standings, and numerous offers to headline major events that could soon catapult him into the sport’s biggest ranks.

“I ask the Lord to lead me in the best direction, and God has answered my prayers,” Vereen says. “I can promise you He will never let me down. But I can also promise you that if you don’t manage your opportunities properly in this sport, you will not have a long career.”

Vereen looks back on his SoCal football career fondly – and is excited to once again sport the team colors, logo, and ‘Defend the Shield.’ He’s aware all his Coyote brothers (including some he’s never met) are cheering wildly for his success.

“I’m blessed and appreciative, for my time with The SoCal Coyotes,” he smiles. “My time there was for sure amazing. I’ll never forget how everyone rallied around me the first time I earned my spot as a starting safety. (Quarterback) Michael Karls has to be one of the top funniest guys I’ve ever met. I worked Coachella with (defensive end) Jake Sheffield. I could tell Coyote stories and just laugh for hours.

“Playing for the Coyotes has prepared me for life in every aspect,” Vereen adds. “I learned to never get comfortable. Work hard. Do the right things on and off the field. Put God first, no matter what.

“And capitalize on every blessing.”