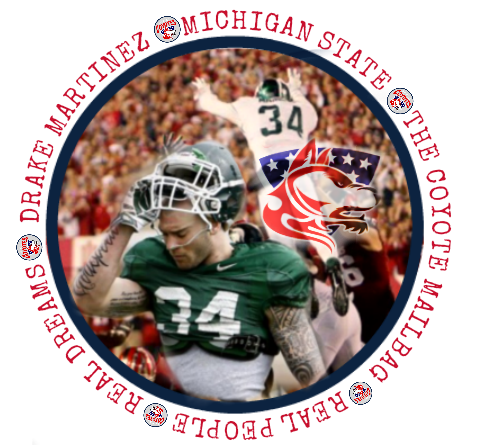 (INDIO) – The charisma was classic.

When SoCal Coyotes coaches asked blue-chip Michigan State prospect Drake Martinez if he was proof-positive he could run with the best receivers ‘in the world’ this fall, the brash rookie didn’t flinch.

“In flip-flops,” he said, matter-of-factly.

After a series of sub-4.4’s in recent pro workouts, Martinez, 6-2, 215, has reason to be confident again. Healed and whole after a bizarre spate of setbacks disrupted his past two college seasons, Martinez is praying his God-given wiring and arsenal of physical gifts will still capture the eyes of scouts.

When the Coyotes open training camp August 10, Martinez will enjoy the balance of a program that prioritizes faith and family as highly as his irrefutable football pedigree.

Penciled in at corner, Martinez will compete for the starting job opposite of returning West Alabama State veteran Ridge Turner. He is ready to regain the elite form that wowed coaches when he was one of the nation’s most promising talents at Nebraska, then at Saddleback College, and finally, Michigan State.

Once rated the #4 outside linebacker in the nation by 247Sports.com – and #9 at cornerback – Martinez is so skilled that Michigan State played him at corner, outside linebacker, and because of his speed, even experimented with him at running back. For the same reasons, expect the Coyotes to also give Martinez a look at receiver.

Martinez is no stranger to playing both ways. The son of Casey and Epifania Martinez, he was named to the Orange County Register’s all-county team and MVP as a senior at Laguna Beach High School, after rushing for 1,613 yards and 23 touchdowns as a senior, averaging 9.4 yards per carry.

On the other side of the ball, Martinez had a stunning 130 tackles, returned four interceptions for 154 yards, and averaged 49.6 yards on kickoff returns and 57.0 on punt returns.

In an email to America’s #1 Developmental Pro Football Program™, Martinez, a Scholar Athlete, made it clear that his biggest statement would be his actions on the field.

“To me being a Coyote is an ‘opportunity.’

“After great research and due diligence into the Coyote football family, I am totally confident this is that opportunity. I feel privileged to learn, grow and be a part of something bigger.

“I feel timing is everything. I feel success comes to those who are prepared, persistent and confident. When opportunities like these present themselves – great things will happen.”