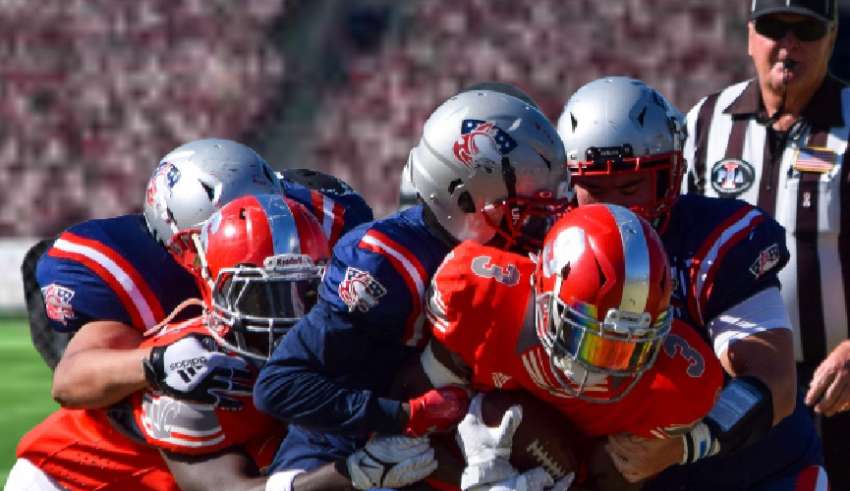 “Extremely proud of how hard our young men fought today,” said Hall of Fame head coach J David Miller. “There was zero ego in our locker room today. More than ever, they stuck together.”

With temperatures soaring into the 90s, the Coyotes’ Darkside Defense didn’t monkey around.

Giving up only 53 yards of rushing, the Darkside Defense had a strong showing on the day. The Silverbacks mustered little-to-no offense against a relentless SoCal attack, which forced two red zone turnovers – and four on the day.

Ageless Rashad ‘The Franchise’ Roberts hauled in a deep 68-yard sideline pass from College of the Desert quarterback Armando Deniz. Deniz also found receiver Robert Taylor for another score from the 10 yard line.

The return of veteran Markese Denmon, led to a more dynamic attack from the Run ‘n’ Shoot offense, with Denmon breaking a huge 21-yard run early in the first quarter.

San Diego escaped the shutout when SoCal’s Deniz – attempting to throw from his own end zone – incidentally stepped on the end line while avoiding pressure.

In 2021, California State Senator Melissa Melendez selected the six-time champion SoCal Coyotes from 40,000 other District 28 Inland Empire and Coachella Valley organizations as ‘Nonprofit of the Year.’  Learn more about how the Coyote full-service nonprofit organization annually impacts thousands of lives across the region at TheSoCalCoyotes.com.

The SoCal Coyotes are the national standard of American developmental football, and are 101-16 under Hall of Fame head coach and non-profit founder J David Miller. The Coyotes’ organization provides elite athletes a professional environment that refines and showcases their skills through trademarked processes similar to the NBA’s G-league and MLB’s minor-league systems.