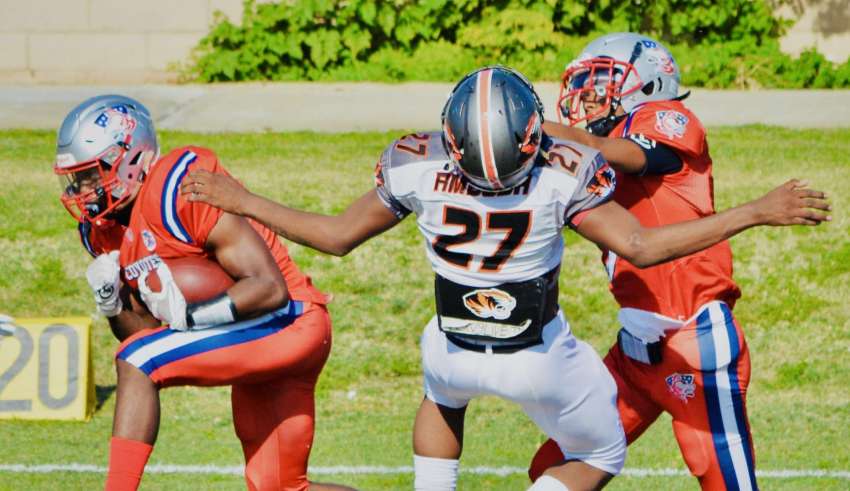 In the sizzling oven that is the Coachella Valley, the six-time champion SoCal Coyotes (6-2) baked the short-handed Santa Clarita Valley Tigers 34-0, in temperatures that reached 114 degrees at Freedom Field.

“The difference for us this afternoon was not the heat or the home-field advantage,” said Coyotes Hall of Fame head coach J David Miller, whose team practices daily in these conditions.

“Frankly the difference was the return of just a couple of key players out of the 20 who we need back healthy – if we are to compete with the best teams in this league for a championship.”

Defensive end and captain Jake Sheffield, who recorded his 96th career sack and forced and recovered a fumble, echoed his head coach.

“If we play our best football and get everybody healthy,” he said, “today was just a tune up of what this team can do, or how far we can go.”

The Coyotes’ ‘Darkside Defense’ was the storyline of the day, punishing Tiger runners and recording their first shutout in their final regular-season game.

“Much respect to the Tigers,” said defensive coordinator and assistant head coach Lawrence Coffey. “It’s not easy to play here. They came in with half their squad and played their guts out.”

For safety, both teams agreed beforehand to as-needed ‘TV time-outs’ – to allow the visiting Tigers cool-downs and water breaks in the suffocating heat.

Karls, who abandoned the shotgun and played most of the game under center, gashed Santa Clarita with two scores and a two-point conversion to ageless receiver Rashad ‘The Franchise’ Roberts, who now has 122 touchdowns in his remarkable career.

Watson added another critical interception, while linebacker Ryan O’Bryant made drive-killing tackles to preserve the shutout. Another fumble recovery by linebacker Mike Greer sealed the deal.

For the first time all year, the Coyotes running game lived up to its promise, piling up first downs and more than 100 yards on the ground.

Draws, traps, sweeps and options featured the trio of Kavan Buggs, Marques Prior and Ty Simmons, who pounded the Tigers and kept key drives alive.

The victory assured the Coyotes of a playoff berth, and a home-field first-round game.

“This is our Lambeau,” Miller said. “Nobody in their right mind wants to go to Green Bay in January, or the desert in June or July. But our guys have earned it, and hopefully, we’ll take advantage of it.”

In spite of the loss, the Santa Clarita Valley is also playoff bound. Depending on final conference standings, the talented Tigers may face the Coyotes – and the insufferable heat – once more.

NONPROFIT OF THE YEAR – On Friday, SoCal players and staff met with California State Senator Melissa Melendez, who selected the Coyotes from 40,000 other Inland Empire and Coachella Valley organizations as ‘2021 Nonprofit of the Year.’  Next stop for the Coyotes will be dinner with Senator Melendez and recognition on the Assembly floor at the State Capitol. Learn more about how the Coyote full-service nonprofit organization annually impacts thousands of lives across the region at TheSoCalCoyotes.com.

The six-time champion SoCal Coyotes are the national standard of American developmental football. The Coyotes’ organization provides elite athletes a professional environment that refines and showcases their skills through trademarked processes similar to the NBA’s D-league and MLB’s minor-league systems.