The desire to succeed can be overwhelming. Despite the most earnest effort and best intentions, most young people need help when faced with life’s challenges.

The Coyotes believe that powerful mentors with credible life histories bridge this gap. We believe that love is a four-letter word spelled T-I-M-E, and we define a mentor as a coach, guide, tutor, facilitator, counselor, or trusted advisor – someone willing to spend his or her T-I-M-E and expertise to guide the development of another person.

A Coyote Mentorship is a relationship formed between a mentor and mentee with the goal of sharing knowledge and expertise between the mentor and the mentee. It can be a formal relationship with written goals and scheduled meeting times – or as simple as an informal occasional chat or email exchange. 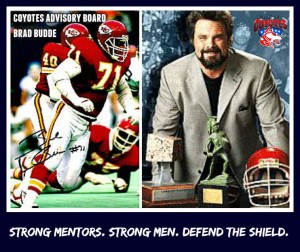 · Ability and willingness to communicate what they know
· Preparedness
· Approachability, availability, and the ability to listen
· Honesty with diplomacy
· Inquisitiveness
· Objectivity and fairness
· Compassion and genuineness

Success must be learned – before it’s earned.

In addition to advisory board duties, Budde serves as a ‘life coach’ to the Coyotes non-profit sports leadership organization, where selfless work ethic, accountability, and improving others – all staples of his decorated career – are standards he sets for the team’s array of mentoring programs.