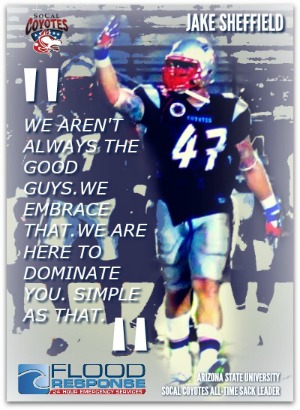 (INDIO) – Defensive end and team captain Jake Sheffield – who breaks the all-time SoCal Coyotes record for sacks (59) every time he destroys another opposing quarterback – is excited to step up to better 2017 competition in the World Developmental Football League.

“We’re no strangers to ‘us against the world,'” says Sheffield, who is looking forward to the Coyotes home opener September 2 against the California Sharks at Shadow Hills.

For 2017, Sheffield is already preaching dominance. In an attention-seeking social-media age, the Coyotes do not break out new uniforms, change helmets or logos, or chat up social media. 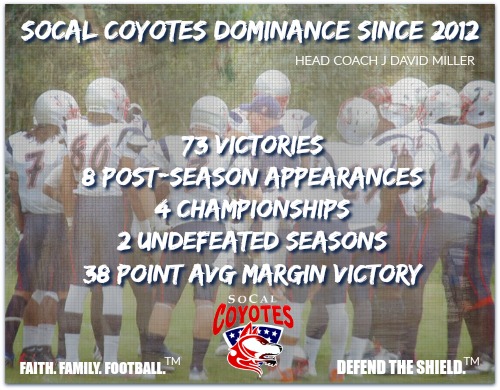 America’s #1 Developmental Pro Football Program™ hasn’t lost a fall game since 2015 – a string dating back 20 consecutive games. They embarrassed three former champions in 2016, beat up an entire league by a combined score of 406-43, and were the only Top 20-ranked California team.

With Facebook popularity nearing 17,000 followers, winning isn’t a Coyote goal – their fans require it, and it’s as traditional as their old-school blue, silver and red.

“Our mindset is championship, nothing less,” said Sheffield, whose team-leading nine sacks helped propel the Coyotes to their second undefeated season in 2016. “We aren’t always the good guys. We embrace that. We are here to dominate you. Simple as that.”

Sheffield graduated from nearby Arizona State University, and is just a few hours short of his master’s degree.

“We’re a dangerous football team,” he says. “All teams have good talent, but attracting the superstars at every position like we do is unheard of, unless you’re playing in the NFL. When we all look back, we all will realize we had the best talent ever assembled here under one roof.”

The Coyotes are now the WDFL villain, but to what degree? Are they Taiwan in the Little League World Series? Duke or Kentucky men’s basketball? Alabama in football? The Death Star?

“It’s not that one-sided,” chuckles Sheffield, “but we certainly don’t mind trending that direction.”

SEVENTY PLAYERS EACH YEAR earn the distinction to ‘Defend the Shield™’ in the uniform of the SoCal Coyotes. Many will earn a shot with NFL, CFL or AFL opportunities, or graduate into business careers. For more information, email SVP Ron DiGrandi at [email protected].