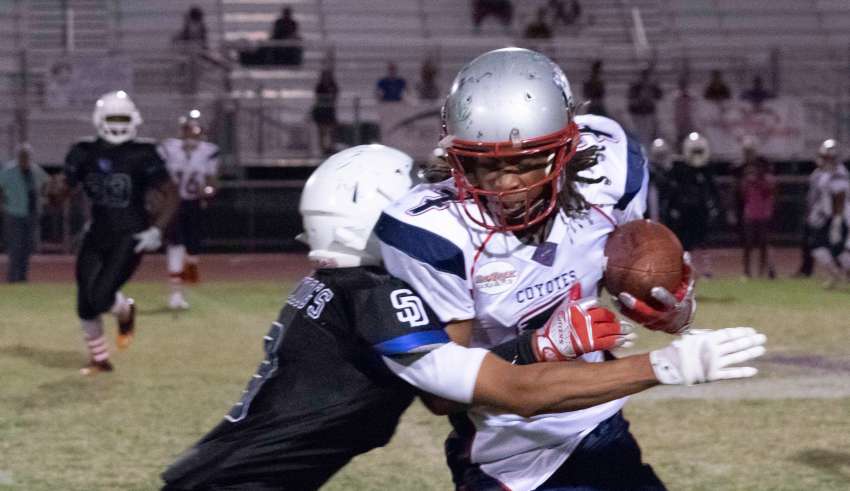 (INDIO) – What do you get when you cross a Pope, a blind guy and a Justin Bieber look-a-like?

Rookie wide receiver Taylor Pope, veteran Rashad ‘The Franchise’ Roberts and rookie Derrick Anderson all gashed The Bulldogs of San Diego for touchdowns in the Coyotes’ 66-0 home-opening win, making it clear that the 2018 edition of the SoCal ‘Silver Stretch’ Run ‘n’ Shoot offense is no joke.

-Pope, the pro prospect from Boise State, had three catches for 38 yards and a touchdown, and returned a punt 50 yards for another.

-Roberts, who minutes before kickoff couldn’t see a thing until he donned a pair of emergency contact lenses, shredded coverages with eight catches for 138 yards and three scores, and earned Player of the Game honors.

-Anderson, a shifty 6-4, 190-pound rookie prospect, sliced through the San Diego defense like a rock star. His similarity to one Justin Bieber has made him a popular hit during the Coyote’s leadership camps, clinics and symposiums, and a target for serious ribbing from teammates.

Along with rookie slotback Ross Robertson, who had six catches for 101 yards, and played the entire game, don’t overlook rookie S back Vince Guzman. The 6-1, 220-pound talent smacked blitzing linebackers and didn’t dance between the tackles, going north and south for 49 yards on nine carries and a score.

This new fleet of Coyotes personifies how the vaunted SoCal program does business – a little past, a little present and a little future, who all combined put up 451 yards of total offense their first week out the gate.

The Coyotes take a 28-game win streak into their showdown with the Cali Wolfpack at Whittier College on Sunday, September 23, at 2 p.m.