Home PACK ATTACKS ‘THE SHIELD AT ONE COYOTE WAY’? SOCAL ‘TRUSTS THE PROCESS’ WILL ‘DO THE JOB’ 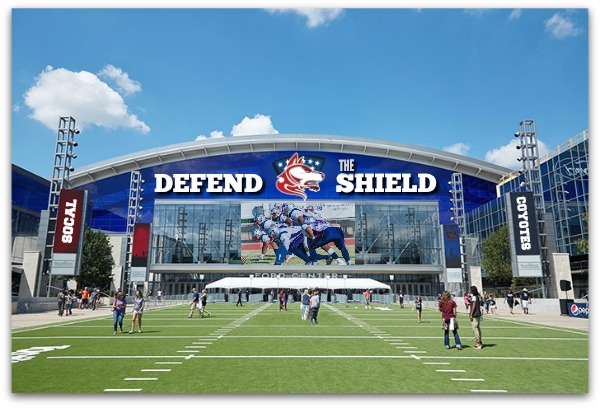 (RANCHO MIRAGE) – Trust the process. Do your job.

Both sound familiar to football fans of the University of Alabama and the New England Patriots – and now, in recent years, the perennial champion SoCal Coyotes, who have become the nation’s model for pro developmental football.

“If you’re not in college, and you’re not in the NFL,” says visionary Coyotes head coach J David Miller, “the only other place is here.”

Building Champions, Building Men. Faith, Family, Football. Defend the Shield. All mantras of America’s #1 Developmental Pro Football Program, which isn’t shy about its vision to build a multi-million-dollar, mixed-use sports complex that Miller predicts will soon be “next” – and as attractive to secondary markets as NFL franchises are to first.

Miller’s idea of ‘next’ is not for the faint of heart. The Hall of Fame coach and business strategist envisions a $60 million development he calls ‘The Shield at One Coyote Way,’ a facility Miller predicts will be on par with The Star in Frisco, the world headquarters and practice facility of the Dallas Cowboys.

Right smack dab in the heart of the Coachella Valley, the projected 25-acre facility will include Coyote team headquarters, an entertainment district with restaurants, retail, hotel, a sports medicine center, and multi-tenant office space.

Negotiations are currently underway with an array of financial and land partners, and locations have narrowed to two specific options in Indio and Rancho Mirage, with preliminary announcements expected soon.

At the heart of the project will be the Coyotes existing partnerships with local municipalities and school districts. The 10,000-seat indoor stadium will house high school operations on one side, and Coyotes on the other – with the shared turf between them.

The Coyotes say the domed ‘Shield’ will have the same NFL amenities as ‘The Star.’ The Shield would make the Coachella Valley an attractive training camp home for any one of four NFL team teams just hours away, including the Rams, Chargers, Cardinals or Raiders, who are building a new $1.5 billion facility in nearby Las Vegas.

“Dream big, or not at all,” says Miller, who has interesting connections to both Alabama’s Nick Saban, and New England’s Bill Belichick. Not coincidentally, he has long-time mentors June Jones and Mouse Davis to thank for both.

Miller authored a book with NFL icon Jerry Glanville when Jones and Nick Saban were members of Glanville’s Houston Oilers staff in 1988. That was the same time-frame Jones and the Oilers were introducing the Run ‘n’ Shoot offense to the NFL, which utterly wrecked Belichick’s then-tenure with the Cleveland Browns.

“June and Mouse certainly taught the offense to Coach Belichick and the NFL the hard way,” says Miller. Meanwhile, his 18-year-old daughter has been accepted at the University of Alabama, where Saban has added four more national titles (six total) since Miller met him in Houston long ago.

The Coyotes enjoy significant web traffic from New England fans, who refer to the team as the ‘Little Patriots.’ Run ‘n’ Shoot offense. Vicious defense. No mistakes. No drama. Just a machine of consistency and measured results, to an 88-percent winning percentage, four championships, two undefeated seasons – and, in just five years, the fastest-growing sports brand in Coachella Valley history.

If Miller continues to ‘do his job,’ then ‘the process’ he’s delivered to the Coachella Valley may not only reshape the landscape, but also leave a legacy for its youth that no one could have ever imagined.

The Coyotes open their 2017 season at Shadow Hills on September 2, against the California Sharks at 1 p.m.

(Conrad Negron is CEO of Negwood Studios and financial analyst for a private equity partner. He may be reached about this story – and The Shield development – at [email protected], or 760.574.6806).