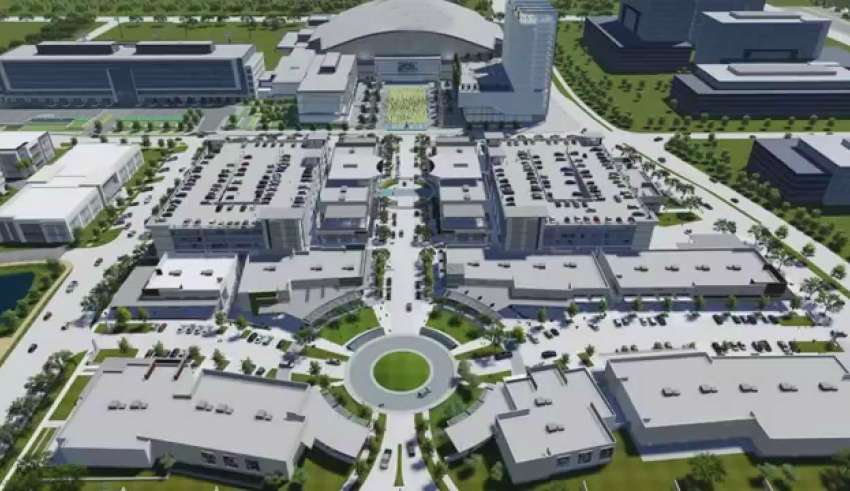 By Amy Diperro, The Desert Sun

(COACHELLA VALLEY) – Developers have announced preliminary plans for a 12,000-seat indoor sports stadium to be built on land between the Classic Club and Interstate 10 in Thousand Palms.

The stadium complex is the brainchild of J. David Miller, the head coach of the Palm Springs-based SoCal Coyotes developmental football team. Miller is hoping to build a permanent home for his squad, and formed the Coachella Sports & Entertainment Stadium Authority to operate the proposed complex.

He also envisions the stadium, which would be called The Shield at 1 Coyote Way, as the future home of youth sports clinics, camps and tournaments.

The master developer of the complex will be Richmond Honan Development and Acquisitions LLC, an Alpharetta, Georgia-based developer of medical facilities. The Shield would be its first stadium.

“A 12,000-seat, air-conditioned stadium, relatively speaking, in terms of our experience in building in airspace and skyscrapers, is not that sophisticated construction,” Honan said.

Developers are eyeing a 125-acre parcel of land for the proposed stadium. The property is currently owned by the H.N. and Frances C. Berger Foundation, a Palm Desert-based nonprofit with assets of more than $450 million as of the end of 2016, according to its most-recent tax filing.

Doug Vance, the foundation’s Vice President of Real Estate, said the land was originally purchased in 2003 to become a university.

According to a county zoning map, portions of the property are approved for both residential and commercial projects. One parcel is zoned for a business park and another is zoned “tourist commercial,” a designation that would permit a hotel and restaurants to move in.

Similarly, the existing land use map covering the property, the NorthStar Specific Plan, sets aside parcels for a hotel, villas, retail space, condominiums and an industrial park.

Honan, Miller and the Berger Foundation are currently in a due diligence period, as the developer researches the property prior to agreeing to purchase it.

Honan said one advantage to the property is its existing zoning, which will allow his company to apply for permits to build the hotel and senior living facilities first, followed by medical office space.

“One of the reasons why we went and contracted with the Berger Foundation directly is because when they explained where they were, we can see the things we can start right away and the things we can do over time,” Honan said.

While the first two components are being designed and under construction, Richmond Honan would simultaneously sketch out the stadium, which would be the third phase of the complex.

Richmond Honan has already identified potential hotel and senior living developers interested in building portions of the property alongside Honan’s company, and each component of the development will likely be financed and owned separately. Richmond Honan is also working with OM REAL, an Irvine-based real estate company, to find investors and co-developers.

Amy DiPierro covers real estate and business news at The Desert Sun in Palm Springs. Reach her at 760-218-2359 or amy.dipierro@desertsun.com. Follow her on Twitter, @amydipierro.