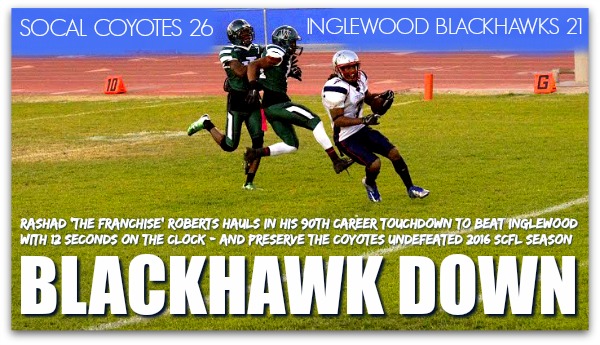 (INDIO) – Put away his rocking chair – he’s not ready for football’s front porch just yet.

Ageless Rashad ‘The Franchise’ Roberts – the SoCal Coyotes all-time leading scorer and receiver – saved his very best for the very last Sunday afternoon, hauling in a 31-yard touchdown from quarterback Jacob Russell with only 12 seconds left to beat the visiting Inglewood Blackhawks, 26-21.

It was Roberts second touchdown of the game, his ninth of the 2016 season, and his 90th all-time, spanning nine spring-fall seasons and four championships with the Coyotes that date back to 2012.

The heart-stopping, see-saw struggle capped a perfect 7-0 season for the Coyotes in the Southern California Football League. It marked the first time in history that any team has beaten the juggernaut of the California Raiders, Vegas Trojans and Inglewood Blackhawks in a single season.

It was the Coyotes fourth consecutive win over Inglewood since 2014. The Blackhawks had two fourth-quarter opportunities to ice the contest, the last one, an apparent game-winning field goal to make it 21-20 Inglewood with just minutes to play.

But Russell cut the field in half with a quick strike to Jarrod Harrington. Seconds later, Roberts split the Inglewood safeties, and Russell, the 2015 NAIA National Player of the Year, hit The Franchise’ in stride for the game-winning score.

The game, to that point, had been a classic battle.

Ten minutes into the first quarter, Russell found Jarrod Harrington with a 15-yard strike to take a 6-0 Coyotes lead. With nine minutes remaining in the second, Inglewood tied the game with a three-yard touchdown from quarterback Damien Cartwright to D.J. Carter.

The Coyotes responded with a 14-yard touchdown pass to Dylan Peebles to go up 14-6. The Darkside Defense – which played heroically all afternoon – returned the ball to the Coyotes, but a fumble in the end zone resulted in a flash Inglewood touchdown with less than a minute left in the second quarter, leaving the game 14-12 at the half.

Neither team scored in the third – but both teams attacked each other like prize fighters in the fourth. Blackhawk defensive lineman B.J. Johnson picked off a Russell screen pass – the quarterback’s first turnover since August 8 – and rumbled to the end zone to give Inglewood an 18-14 lead with seven minutes left in the contest.

Russell redeemed himself immediately, lacing a 58-yard bomb down the left sideline to Rashad ‘The Franchise’ Roberts to give the Coyotes a 20-18 edge.

The Darkside Defense held, but another Coyote turnover gave the Blackhawks life – again – and Inglewood made SoCal pay. With under two minutes to play, kicker Rene Renteria hit a 37-yard field goal that appeared to give the Blackhawks the win.

That only set the stage for another curtain call from Roberts, who brought down the house with his epic encore touchdown to win the game.

Unofficially, Russell completed 20 of 45 for 309 yards and four touchdowns. Jarrod Harrington led all receivers with eight catches for 104 yards and a score.

Roberts had four catches for 113 yards, which gives him 6,089 receiving in his storied Coyote career.

RASHAD ROBERTS’ 9,014 total yards and 108 total touchdowns are among his many franchise records. Over his nine seasons, Roberts also has 1,712 yards and 12 TDs passing/rushing, and another 1,224 yards and six touchdowns as a KR/PR. Coyotes coach J David Miller nicknamed Roberts ‘The Franchise’ during his rookie year in 2012, when the Atlanta native led the Coyotes on a dazzling nine-game win streak that earned the team’s first title.