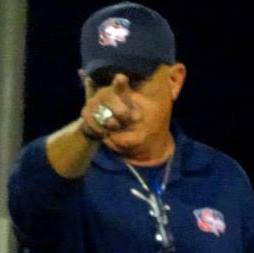 (PALM SPRINGS) — This fall 2014, the two-time champion SoCal Coyotes will play the fifth season of their storied history, after going undefeated (2-0) in the spring. Next up is a 10-game season in the National Developmental Professional Football League.

The Coyotes have enjoyed a remarkable and aggressive offseason – if you call it that. The team has added 15 new players on offense and 17 on defense;  launched two new summer football camps; destroyed the Los Angeles Marauders twice and joined the NDPFL –all while tirelessly volunteering in nearly every desert middle school, and donating thousands of dollars to those who need it.

I sat down with head coach J David Miller in his office to ask 10 questions I commonly hear from many fans. Like most coaches, he believes in his program, wasn’t short on details, and left little to chance. Here are his answers.

1. WHAT IS THE NATIONAL DEVELOPMENTAL PROFESSIONAL FOOTBALL LEAGUE?

It’s an exciting, brand-new league, based in Southern California, engineered to showcase top-tier talent in major markets.  The SoCal Coyotes non-profit sports leadership organization is now a year-round football academy. The NDPFL has growing up to do, and we’re here to help. We need games for our pro-ready players in game environments. For a player, game film is currency. You can’t get enough of it, either to improve yourself, or shop your talents. It’s invaluable to agents, scouts, coaches and GMs. And there’s only one way to get it – play. The real winners, besides our players, are the fans of Greater Palm Springs. They are about to witness some incredible, explosive football in a beautiful, fun, family environment.

2. HAVE THE COYOTES BECOME A TRUSTED FEEDER PROGRAM?

If you look at our track record, specifically, the past four months, absolutely. We’re the only team at this level to put a player in the NFL and have another get a Division-I scholarship. Both levels trust us. At this very moment, we have 53 young men under development fighting for roster spots, and I’m extremely proud of all of them. Their hard work and sacrifice is very real, on our practice fields, in the classrooms, in their homes, and in their lives. Recently we had one player work out for the Miami Dolphins, one went to the Cleveland Browns, two more have been in camp with NFL teams, another Coyote had a two-day tryout with Los Angeles in the Arena Football League, and two more were offered AFL contracts. Every bit of their effort is documented and cultivated. Every rep is their chance to get better. I tell the players, ‘If the worst thing that happens is you become a ‘career’ Coyote, look around you — there are a lot worse places to be.’ Even if they never make it at the next level, what they’ve learned and experienced here can be a life-changing experience.

3. YOU SPEAK OFTEN ABOUT ‘ROR.’ WHAT DOES THAT MEAN?

Return on relationship. Every relationship in your life represents a chance to get better or worse. Show us your friends, and we’ll show you your future. Good character suffocates bad characters – they can’t breathe the same air. The rookies are growing up fast with the benefit of our All-Americans and veterans with NFL experience. You can’t hang out in a barber shop and not get a haircut. You can’t be in the Coyote environment and culture and not become a better player, or a better man. These guys challenge each other in and out of the locker room. Now, in our fourth season, we demand it.

4. DO THE PLAYERS LIKE THE DISCIPLINE AND THE STRUCTURE?

Ask them yourself. The great ones wouldn’t come back if they didn’t. Nobody here is a hostage. On that note — can you name one NFL, CFL or AFL team that wants an undisciplined player from a street program? When a team gets a Coyote, they know exactly what environment he was in, how he was coached, and what the expectations were. We’re totally transparent. They can look online at his photos from practice and his film from games. They can see how he spent his free time. We are preparing them to be first-class citizens, both in football, as role models, leaders in their home, or in any work environment. A Coyote should instantly make things better, no matter where he goes or what he does. So details like ‘pull up your socks,’ or ‘tuck in your game jersey’ are very important to us. Respect around here is earned. When our players appear in public schools and they are mobbed by kids who love them, they understand the enormous responsibility of being a leader. Our players embrace structure because they see the difference, and they’ve earned the results. And ask them — we have a blast on the field. Nothing feels better than making great plays against the best talent.

5. WHAT DO YOU EXPECT OF A PLAYER BESIDES FOOTBALL?

A willingness to be coached, to learn, to be the best, and be a role model. In our player-intake orientation, we teach every young man that if he wants to be treated like Jerry Rice, he needs to act like Jerry Rice. There’s the level of expectation. We respectfully ask our guys to wear collared shirts – and now they can’t even walk through the clubhouse without one. We don’t condone use of the f-word or the n-word, and demand everyone be treated with respect and dignity. Add up all these things and it makes our guys another word — Employable. Anybody can slosh around in the mud with the pigs. But it takes a man to run the farm. We’re building confident men.

6. HOW DO YOU SEE THE NDPFL HELPING THESE PLAYERS?

Workouts only do so much. You can’t replicate or duplicate game experience or game speed. Players need to compete in a full-speed game environment to hone game skills. What’s the point of parking a Formula One car in the garage? You’ve got to rev it and race it to improve it. Every player in the Coyote environment is getting better every single practice. Frankly, if we played no games, our guys are improving their skills with just the reps they’re getting against amazing, competitive athletes. Add 10 games against unbelievable quality talent with game situations, and you’re going to see some outstanding football from NFL-ready players proving they deserve that NFL roster spot in an NFL camp.

7. HOW IMPRESSIVE IS THE COYOTES SPRING RECRUITING CLASS?

We dominated the spring. This defense could beat a half-dozen Arena -1 teams right now, and certainly most D-1 schools.  This is our best class ever. Across the board, we’re pretty much D-1, all-star, MVP, All-American or all of the above, and that’s a tribute to our entire organization. Number one, great players want to compete against the very best. Second, when they trust the culture, and the environment is healthy, they are improving their career, and their reputation, by being here. Third, we have great young coaches in Brett Davis and Shane Helms, and our management is clearly capable of promoting them to the next level. Fourth, they are marketed professionally, and represented in good taste. Fifth, our medical team takes great care of their bodies, even bumps and bruises. I’m excited now when NFL players come back to us and say, ‘Wow – I don’t plan to be here long, but I’m glad to be home.’ Coyote football is Coyote family. Players talk. You can’t lie to the players. They love it here, and now there’s no shortage of great players from around the nation trying to get a shot here.

8. HOW BIG OF AN ADVANTAGE IS PALM SPRINGS?

I’ve been to Valley Ranch many times, and the Dallas Cowboys don’t have a better environment than we do. But no matter where we practice or take the field, even on the road, we make it a championship, professional business atmosphere that makes everybody take it up 10 notches. From the top down, everybody in the entire Coyote organization wants to see marked improvement every single day. That’s when it gets fun. Everybody’s holding everybody accountable. If you aren’t better than you were yesterday, you simply don’t belong here. Take your mouth and your ego somewhere else, because on this field, everybody’s great, and they talk with their talent.

9. HOW MUCH IS INVOLVED IN PUTTING THE COYOTES BACK ON THE FIELD?

This week I was visiting with Matt Jones, owner of Cathedral City Collision, who paints our helmets their beautiful new century silver, and dips our facemasks fire-engine red. I told him, ‘You are a critical piece of this program, and we can’t play ball without you.’ We’re blessed that we can now say those exact same words to about 25 corporate partners and people who all play similar key roles in putting this football team on the field. This is their football team. Our players love, appreciate, and play hard for every single one of them.

Mouse believes we should always out-score you and that we always hold the chalk last. June has taught us all at Hawaii and SMU that you can take impossible, and make it possible, if you’re committed and courageous, and can ignore the ankle-biters. Coach Marcum taught us that if we can dominate you defensively up front on the line of scrimmage, we should win. Joe’s defenses were led by great linebackers who harassed teams into mistakes and turnovers. Ray coached baseball with a football mentality – that humility, and consistency in every category, always wins long-term. They’re all right. You see a little bit of it everywhere in the Coyote culture. We’re fun, we’re disciplined, we’re consistent. But none of it means anything if you don’t have great coaches and fine young men who believe it and are willing to do it. We will keep improving until we hold another trophy up. And we will keep giving thanks every day to the Lord, for His grace, forgiveness, and each new opportunity to change our lives, and use them for His glory.

FOR MORE INFORMATION, call 760.250.2514, or email [email protected] Fans are invited to visit the team’s website at www.thesocalcoyotes.com, or research the Coyotes athttp://en.wikipedia.org/wiki/SoCal_Coyotes.