Home Archived Posts ‘SUPERAGENT: THE ONE BOOK THE NFL AND NCAA DON’T WANT YOU TO READ’ 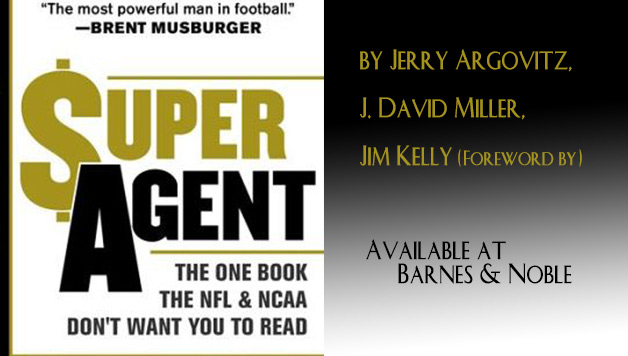 BARNES & NOBLE RELEASES ARGOVITZ-MILLER TELL-ALL BOOK: ‘SUPERAGENT: THE ONE BOOK THE NFL AND NCAA DON’T WANT YOU TO READ’

(NEW YORK) — If you thought the football world had seen the last of bombastic super agent and iconoclastic sports millionaire Jerry Argovitz, you better think again.

In a tell-all book that tarnishes the badge of the NFL and could bring the NCAA to its knees, the world’s largest bookseller stocked shelves today with the collaborative effort between Argovitz — called by Brent Musburger as “the most powerful man in sports” — and award-winning investigative author and coach J. David Miller.

“SuperAgent: The One Book the NFL and NCAA Don’t Want You to Read” culminates a 30-year friendship and two-year effort between Argovitz and Miller, and features an equally stinging foreword by former Chicago quarterback Jim McMahon, who led the Bears to the 1985 Super Bowl.

Argovitz delivers bombshells with his “10-point plan” to either reform or abolish the NCAA and its current system, and in what will be can’t-put-it-down reading for every NFL fan, he spares no sacred cows. Readers are allowed inside his files to dirty back-room negotiations with the greatest teams and their greatest owners, including the Bears, Chargers, Lions, Dolphins, Bucs, Oilers and many more.

The authors didn’t stop there. If you think the NFL didn’t fear the United States Football League, where Argovitz became an owner and power broker, then join Argovitz as he takes you into behind the curtain with megalomaniac Donald Trump.

Argovitz — unafraid to release never-before-seen documents or pinpoint how Trump destroyed the USFL — presents a case study of how the NFL catapulted the the upstart league to become a billion-dollar empire.

“If everybody hates you, you’ve got to be doing something right,” Argovitz says today. “It’s all true. I was there.”

Co-author Miller agrees. “Jerry has been called everything from a lying scumbag to a maverick, to an idiot,” he says. “But the deeper you dig, the more you realize Jerry was a visionary who changed the game — on the field, in the boardroom, in the courtroom, and at the bank. Fans are going to be shocked.”

SuperAgent was simultaneously released on Amazon.com.