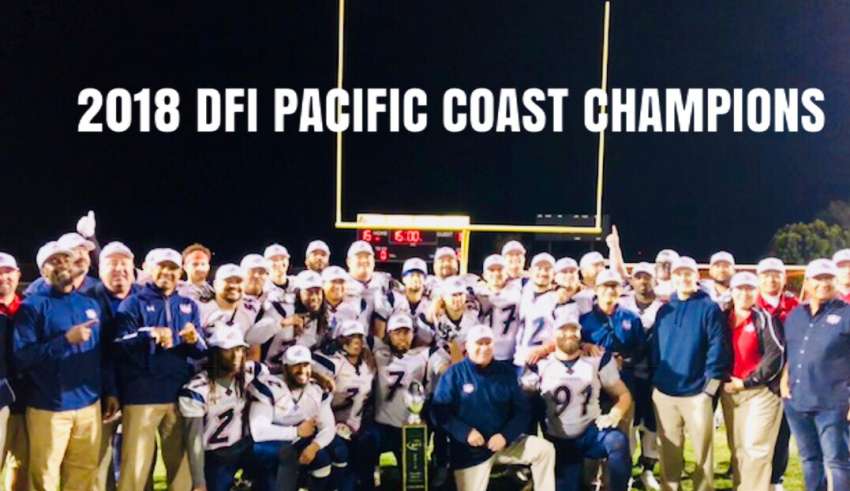 (INDIO) – IN THE DAYS LEADING up to its 2018 Pacific Coast Championship, Developmental Football International promised that the season-ending showcase would be just as out-of-the-box as its league-wide vision to become the ‘Chick-fil-A of pro football.’

Well, mission accomplished, at least on the former – when it became the only league in recent memory to start a game with a thrilling helicopter spectacle that almost upstaged the game itself.

With the Bulldogs of San Diego and the SoCal Coyotes waiting for kickoff, a JOIRIDE helicopter suddenly appeared in the darkness, buzzing Shadow Hills Stadium.

Aboard was NBC sports anchor Amy Zimmer, who was doing the ceremonial coin toss, only this was unlike any coin toss you’ve ever seen.

An oversized commemorative DFI ‘coin’ – a 2’ x 2’ wooden monstrosity featuring DFI, Bulldogs and Coyotes logos – was being pushed from the door, as the helicopter dropped to within five feet of the playing field.

Waiting below to verify heads or tails was Indio Mayor Michael Wilson. The giant coin tumbled out, the crowd gasped, but then it hung, somehow resting on the landing gear of the aircraft. It was high suspense, and the crowd was into it, roaring approval as the helicopter pilot swayed the aircraft to send the giant coin to the field.

Five feet made the difference – as the chopper dropped suddenly, the coin dropped with it, flipping to the ground. The Bulldogs won the toss – even the Mayor said so. What ensued next was three hours of championship football that spun just as wildly – and came down to the game’s final play.

THE COYOTES DID THEIR part to keep the Bulldogs in the game, turning the ball over four times. In fact, turnovers stopped both teams in the red zone twice, as the game was fought back and forth between the 20s.

But head coach J David Miller had made a decision early in the week to start and play most of his local rookies. What they lacked in big-game experience, they made up for with home-town pride. Players from across the desert who once had been mortal enemies as stars in local high schools were now fighting for the pride of the Coachella Valley, and fight they did.

“What an amazing game,” said Coach Miller. “Our kids showed a lot of resiliency. Don’t take anything away from the Bulldogs – they fought hard, they fought like champions tonight. But we did too, and we got the win.”

On the game’s opening drive, the Coyotes scored on a 32-yard Luis Castellanos field goal, and it stayed 3-0 to end the first half as both teams put on a defensive display.

On their first possession of the second half, the Coyotes extended the lead when quarterback Dominic Houghton – in only his second start – found Derek Anderson over the middle for a 65-yard catch-and-run touchdown.

THE ‘DARKSIDE DEFENSE’ proved to be the difference. Cornerback Brandon Cole played a brilliant game, including a drive-killing interception that thwarted one long Bulldog drive. Team captain and all-time sack leader Jake Sheffield had four tackles, and added two sacks and a tackle for loss. Marquis Dobbs, playing with an injured shoulder, had eight tackles, including two for loss.

Offensively, running back Jordan Warford gashed the Bulldogs for 107 yards on eight carries. Anderson had the best night of his rookie season, with five catches for 100 yards, while Ross Robertson had two catches for 30 yards. Anderson also recovered a Coyote fumble that kept a scoring drive alive.

“You got two teams just fighting, clawing, kicking, biting, doing anything they can,” said Coach Miller. “That’s football. The ups and downs of football and two great football teams battling it out. It’s great for the fans, but every time they stopped a drive, it was like we got sucker punched.”

After two more fourth-quarter possessions ended in Castellanos field goals of 42 and 32 yards, respectively, the Bulldogs could sense the Coyotes were simply out of gas.

A fourth Coyote field goal attempt was blocked, and the Bulldogs answered with a 27-yard touchdown run that cut the lead to 15-8.

A BULLDOG’S NOSE IS SLANTED so it can breathe without letting go – and for 58 minutes San Diego proved it. They showed up and showed out, and kept coming, not matter how many times the Coyotes tried and failed to put them away.

When the Coyotes were forced to punt for the sixth time with barely two minutes to play, San Diego quarterback Will Williams burst to life, and spectacularly marched his team down the field to pull the Bulldogs within a point at 15-14, with just seconds remaining.

Overtime? Not a chance. The Coyotes, exhausted from chasing the elusive Williams all over the field, visibly sighed when the Bulldogs offense came back out to go for two, and the win.

It’s hard to know what goes through a quarterback’s mind in the nano-second he must deliver the football. But when Williams took the snap and rolled to his left, he could feel the hot breath steaming from Jake Sheffield, who was bearing down on him from a step away when the quarterback released the football to a running back who had wiggled free in the end zone.

Five feet made the difference.

Williams pass sailed wide, and the Coyotes were Pacific Coast Champions, in an epic thriller where the bite lived up to its bark.

DFI is the first American developmental football organization engineered to cultivate the annual flow of 16,000 Division I, II, and III prospects. It is the first turn-key franchise platform to develop elite athletes who are attempting to thread a needle of opportunity in their personal and professional lives.

​The league plays by NFL rules, with NFL-style uniforms, and oversight from former NFL executives, coaches and players.  ‘Above the Line’ leadership development is a Chief Cornerstone of DFI, where becoming a “Game-Ready Player’ also requires prospects to be a ‘Life-Ready Man™.’