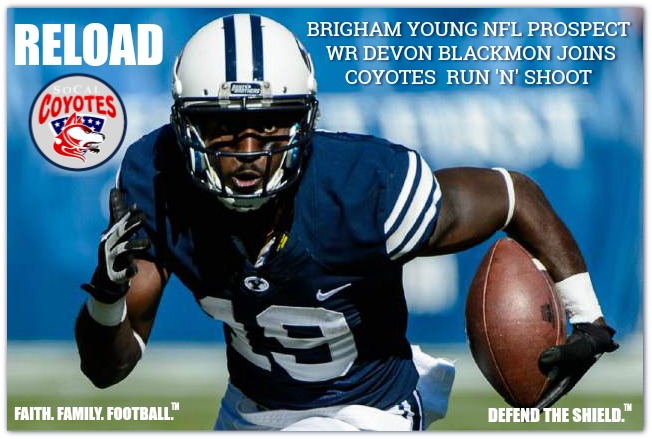 Blackmon, 5-11, 190, lettered at Brigham Young as a junior and senior while playing in a total of 23 games. He tallied 799 receiving yards during his career, and registered a career-long 70 yard reception against Boise State in 2015. He logged several sub 4.4’s during his Pro Day workouts.

The son of Ayanna and Lawal Balogon, Blackmon was BYU’s second-leading receiver in yards and receptions as a senior. He was named to several All-Independent teams for his standout performances.

Blackmon was a four-star prospect at Riverside City College, after he transferred from the University of Oregon. Prior to moving on to BYU, Blackmon was rated No. 4 overall by ESPN.com, while Rivals.com rated him No. 9.

The Long Beach Post-Telegram named Blackmon ‘The Best in the West’ after he helped RCC to a 10-2 season.

As a kick returner, Blackmon has a career average of 29.4 yards per return.

Blackmon was four-time letter-winner in track in high school, and the CIF champion in the 110-meter hurdles.

The Coyotes project Blackmon in the slot, alongside returning veteran Jarrod Harrington, a former All-American. Harrington, another 4.3 speedster, led the Coyotes to a perfect 7-0 season in 2016 with a league-best 35 catches for 620 yards and 14 touchdowns, averaging 17.7 yards a catch.

The Coyotes report to training camp August 10. The Coyotes anchor the Pacific Coast Division of the World Developmental Football League, and open at their Shadow Hills home September 2 against the California Sharks at 7 p.m.

CONVEYOR BELT OF CHARACTER – The SoCal Coyotes non-profit sports leadership organization is a conveyor belt of character, competence, and connection, delivering life-changing leadership skills to not only their pro prospects, but also thousands of youth each year through an arsenal of community outreach programs.