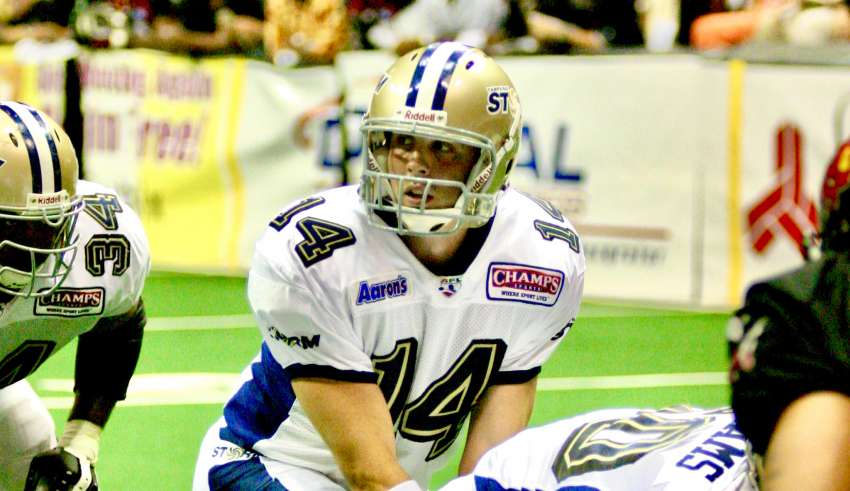 (PALM SPRINGS, Calif.) – Heralded professional football coach ‘Sugar’ Shane Stafford – who was the most prolific quarterback in Tampa Bay Storm history during the heyday of the Arena Football League – has signed with the six-time champion SoCal Coyotes as assistant head coach and offensive coordinator for the 2022 season.

Stafford is a formidable addition to America’s #1 Developmental Pro Football Program™. He reunites with Coyotes’ Hall of Fame head coach and non-profit founder J David Miller,  who was Senior Vice President of the Storm during a portion of Stafford’s standout 10-year professional playing career.

“Sugar Shane is an offensive savant – one of the brightest young football minds and play callers in the country,” Coach Miller said. “He is an inspiring communicator and brilliant teacher – with a passion for the development of young men.”

With other opportunities on the table, Stafford chose to spend his spring with Miller’s Coyotes, a flagship franchise in Developmental Football International (DFI).

“Ego is the leading cause of unemployment in the football world,” Coach Miller said. “Developmental football offers unique opportunities for both players and coaches. It speaks volumes to our organization how excited Shane is to coach our young men. His passion is contagious. He can’t wait to whiteboard, break down and build up each one of our guys – and ultimately win another championship, and help them discover new opportunities with their lives.” 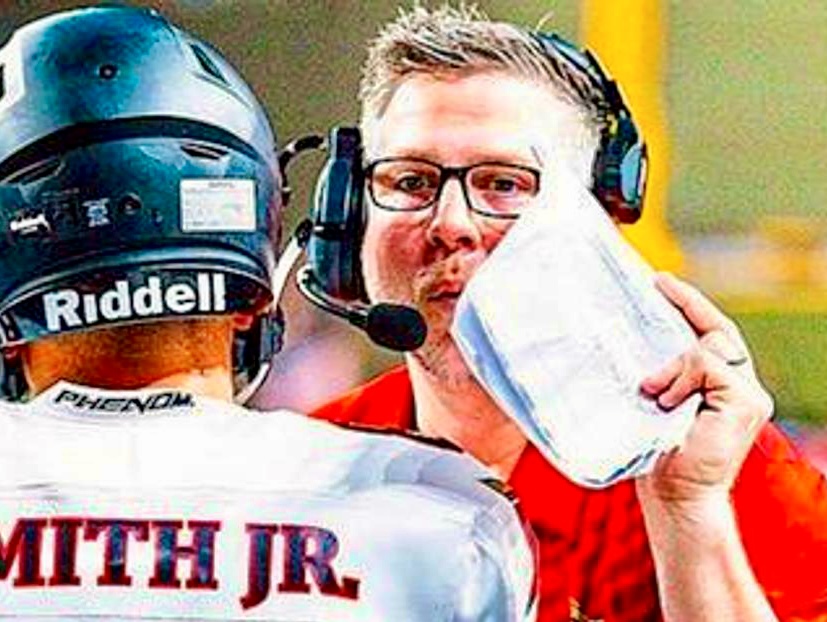 Stafford has been widely recognized for his youth, creativity and innovation during his stops as offensive coordinator for three professional Arena teams. But it’s his leadership that Coach Miller is counting on.

“Good coaches may be clever play callers, or demanding drill sergeants, or organized middle managers,” Coach Miller said. “But football is the ultimate team sport, and real success doesn’t depend on ‘just’ tactics or discipline or order. It always comes down to how a coach leads.”

With the Coyotes, Coach Stafford will have the opportunity and platform to showcase his 11-man outdoor skills as an elite teacher, game-planner, play caller and leader.

“What separates good coaches from great coaches is trust and accountability,” Coach Miller said. “Shane has both, and is on a progression to become a great head coach in any league very soon. We are fortunate to get him on his way up.”

One of the stated 2022 goals from the Coyotes coaching staff is to open up their volatile Run ‘n’ Shoot playbook – and get more creativity from the quarterback position.

“Reverses, screens, shovel passes, naked bootlegs – it’s all in there, just seldom used,” said GM Scott Alvarez. “The Coyote organization is counting on Coach Stafford’s energy and experience to ignite our Run ’n’ Shoot offense, both in the classroom and on the field.”

‘A Giant Heart for Those in Need’

During his last three years as a player, what Stafford did off the field was as memorable as what he did on the field – and made him a runner-up for the Arena Football League’s Al Lucas Award (the AFL’s version of the ‘Walter Payton Man of the Year’ honor).

Shane invested countless hours tutoring and mentoring kids and their families at the Tampa Cancer Center. In Orlando, he was a frequent volunteer with the Children’s Miracle Network – and donated funds for a new basketball court at a local youth center.

Stafford is expected to play a big role in the Coyotes’ ‘Above the Line’ leadership programs, which impact over 50,000 youth annually throughout the Coachella Valley.

“Shane has a giant heart for those in need,” Coach Miller said. “He’s going to be a huge influence in teaching our young players the value behind a child’s smile.”

Stafford spent time on the practice squads of the Cleveland Browns, New England Patriots, and Tampa Bay Buccaneers, and started a full season with the Scottish Claymores of NFL-Europe before joining the Storm.

He played collegiately at the University of Connecticut under Skip Holtz, where his passer rating of 143.4 is still the best in school history.

Quarterbacks who fail to gain the respect of teammates leave a team rudderless. Such is not the case for the 2022 spring Coyotes, who are “all in” at QB1 with a very familiar face: Rashad ‘The Franchise’ Roberts, who holds 16 team records, most in franchise history.

Virtually all of those records, however, have come at the wide receiver position. 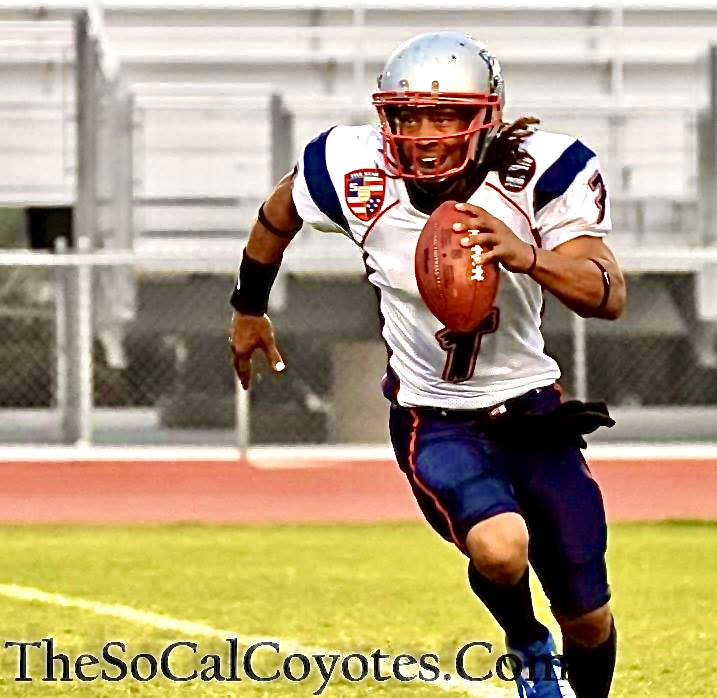 Roberts learned the Run ‘n’ Shoot from the legendary godfather himself – Darrel ‘Mouse’ Davis, who created the modern four-wide offense.

During the formative years of both the Coyotes and Roberts, Coach Miller would fly Mouse Davis in for training camps  to teach the installs.

Besides Miller, nobody in the Coyotes’ building knows the playbook better than ‘The Franchise.’

“The best time to develop a quarterback is when you already have one,” said Coach Miller, who notes Roberts’ three-dimensional grasp of the fire-breathing offense.

Credit the Coyotes for giving Roberts his own ‘Quarterback Whisperer’ in Shane Stafford to perfect his transition.

Stafford will hone Roberts’ reads, improve his decision-making, and polish his timing, technique and command.

In Roberts, Stafford inherits the best – and most selfless – athlete to ever don the Coyote silver, red and blue. Across his storied SoCal career, Roberts has 343 receptions for 6,493 yards and 104 touchdowns, a ridiculous 18.9 yards-per-catch average. Six times he has ended games with walk-off touchdowns, including a 32-yard score in 2016 that preserved the Coyotes perfect 7-0 undefeated season.

Roberts has been a catalyst in the Coyotes’ six championships, and is one of only two remaining players from the team’s inception in 2012. His 9,738 total yards from scrimmage and 122 total touchdowns are also franchise records. Over his 12 seasons, Roberts also has 1,712 yards and 12 TDs passing/rushing, and another 1,224 yards and six touchdowns as a KR/PR.

In 2012, Coach Miller nicknamed Roberts ‘The Franchise’ during his rookie year, when the Atlanta native led the Coyotes on a dazzling nine-game win streak that earned the team’s first of six titles.

Fast forward to 2022. The Coyotes are just as hungry for their seventh title. Synonmous with excellence, the organization has spent a decade building a sound, faith-based culture around realistic plans, strong leadership and a talented workforce.

“Realistic optimism is the offspring of confidence and self-assurance,” Coach Miller said.

Two ingredients that ‘Sugar’ Shane Stafford has delivered in abundance, everywhere he’s been.

Coachella Sports & Entertainment Stadium Authority LLC specializes in marketing, funding, media, licensing and branding, and works with an array of sports organizations, entertainment conglomerates, schools and institutions. It owns, manages, operates, partners and commercially represents memorable events that influence every facet of modern culture, with a focus on family values. CSESA is the master developer, operator and manager of The Shield at 1 Coyote Way.