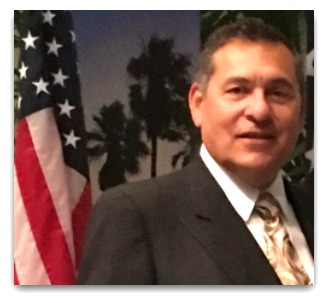 Since 1984, Mr. Salinas has worked as an active Licensed Commercial/Industrial Realtor, and provides expertise and services to both companies and individuals throughout California, Hawaii, Nevada and Idaho.

Since 2007, Mr. Salinas has served as co-chair of the IT Committee for the USC IGM Art Gallery, and also volunteers considerable time to an array of non-profits, including celebrity golf events, fundraisers for children’s charities, at-risk youth and U.S. Veterans.

His military experience and acumen have presented numerous opportunities in private industry, where Mr. Salinas has served as a senior consultant and applications engineer on aerospace and military contracts.

Born in Harlingen, Texas, Mr. Salinas attended Palm Springs High School, and joined the U.S. Navy, where he excelled as a Specialist in Advanced Avionics and System Support. He served overseas and was awarded the Navy Expeditionary Medal for his support, dedication, and participation in the 1979-81 Iran hostage crisis.

Upon his return, he served as an Aerospace Engineer with Hughes Aerospace & Communications. Mr. Salinas advanced to the Northrop Aircraft Division, where as a Systems Analyst he supported new aircraft for the Department of Defense, including the F-20/F-111/B2 Stealth, all of which required top-secret clearance.

In 1986, the Department of Defense offered Mr. Salinas the position of Operations and Systems Support Analyst with the Veterans Administration. As an Information Specialist, Mr. Salinas supported various projects, and was a Systems Analyst on the high-speed, electronic-digital development team that created the current Digital Imaging and Military Medical Records system used today.

Since 1994, when Mr. Salinas returned to private life, he has lived in Palm Springs.