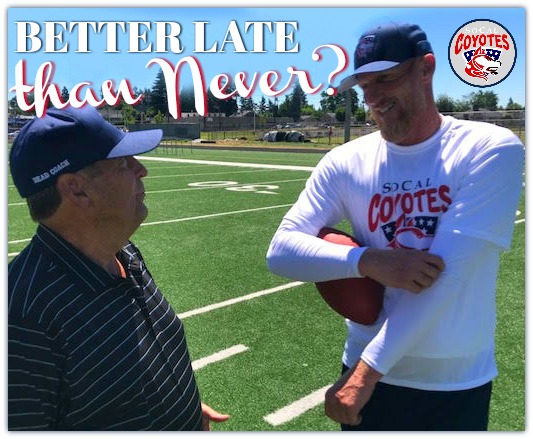 (PORTLAND) – A very sober Todd Marinovich, circa 2017, stepped off an airplane, hailed a  ride, and made his way to the Sheraton Resort, where he was about to meet Darrel ‘Mouse’ Davis, godfather of the Run ‘n’ Shoot and modern four-wide offense, for the first time.

As they usually do, cameras and press had already beat him there. Veteran filmmaker Sean Pamphilon, Emmy-winning producer of the ESPN 30-for-30 ‘Run Ricky Run,’ was waiting patiently to make sure his film crew recorded history.

Marinovich, 6-4, 225, may have been nervous, but you couldn’t tell. Perhaps the most-maligned quarterback in modern history – virtually all self-inflicted – Marinovich had made a decision to do the impossible: Play again, at age 48. 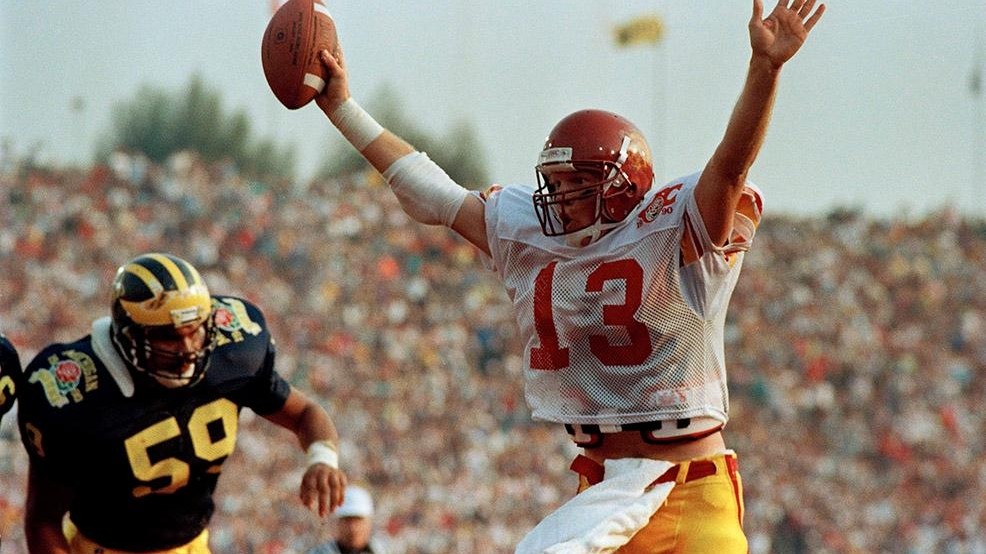 For the 1990 Rose Bowl winner and 1991 first-overall pick of the Los Angeles Raiders, this story-line couldn’t get any bigger.

The star of his own ESPN 30-for-30, ‘The Marinovich Project,’ which aired five consecutive years on Netflix, Marinovich had the world convinced he’d finally beaten the demons of drugs that hounded him to the very deep depths of his own personal hell.

Then there was the relapse, the arrest, the latest probation, the most recent recovery. And now, perhaps the most improbable comeback in the history of sports, for reasons that only Marinovich can understand, and has yet to reveal.

The team? The SoCal Coyotes, a developmental pro football powerhouse, and for the past five years, a Run ‘n’ Shoot mecca. Led by long-time Davis-protege and three-time coach of the year J David Miller, the four-time champion Coyotes were willing to give Marinovich a shot.

But even the Coyotes, professed purveyors of faith, hope and redemption, still wanted a second opinion from their patriarch.

Enter Mouse. If anyone knows a quarterback when he sees one – no matter how old or speckled the horse may be – it’s Davis. And when it comes to offense, Mouse is the Holy Grail, like Moses coming down with the tablets himself.

How would Mouse feel about adding a resurrected Marinovich, whose football career was left for dead in 2001? Davis greeted him at the hotel, and the bond seemed immediate, and sincere.

“TOAD,” cracked the ageless Davis. He grabbed the grinning Marinovich, and tugged at the gray poking through his beard. “Are you ab-so-lute-ly positive about this decision?”

“Well, if you’re gonna do it,” smiled Davis, “you may as well be spectacular.”

They both roared with laughter. Briefly, the pair answered questions, posed for a few pictures, then were whisked off to a nearby campus football field. Once there, Mouse was all business.

For 90 minutes, Marinovich went through an exhaustive workout like a man half his age. Bucket steps. Bug the eyes. Half rolls. Under the unforgiving scrutiny and orders of Davis, Marinovich stepped into a system that spans five generations of heralded Run ‘n’ Shoot quarterbacks, and passed his first test with flying colors.

“Once he starts spinning it, you kind of forget his age,” whistled Davis, clearly impressed. “He’s got a gift, for sure.”

“When you see the release, you get goosebumps,” said Miller. “It was like we all stepped into a time machine.”

Afterward, Mouse locked Marinovich in a classroom for some Run ‘n’ Shoot 101. For the rest of the day, Davis unloaded, white-boarding the Go, Choice, and Switch until Marinovich was numb from an explosion of point-scoring possibilities.

“He’s intelligent,” Davis said. “You want the kid to make it. If football can help him do that, that’s a pretty big deal. Jeez, he must have been something really, really special, back in the day.”

“But here’s the deal,” said Davis. “With reasonable certainty, I can say from experience, the 24-year-old defensive ends that will be chasing his ass don’t give a damn.”

Something, for sure, is chasing a very driven Todd Marinovich.

And, at least for now, he’s not talking.