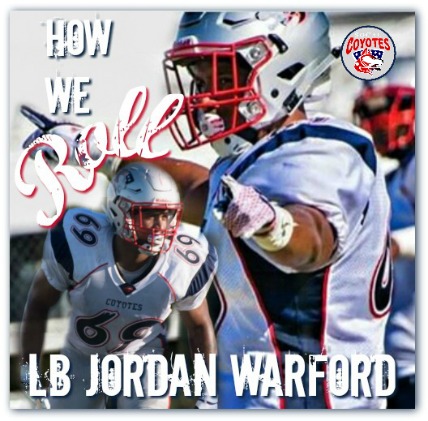 “How We Roll” – a hip-hop anthem to the SoCal Coyotes, from linebacker Jordan Warford – is now available to Coyote fans around the world. One quick listen and it’s crystal clear – just like Warford and the rest of his ‘Darkside Defense’ teammates – this is one crazy band of characters.

“We don’t take ourselves too seriously – we’re just smacking people and having ridiculous fun,” says Warford. Usually, he adds, at the expense of opposing quarterbacks. In 2016, the Darkside barely budged, as the Coyotes out-scored opponents 406-43 in a perfect 7-0 season.

In “How We Roll” – the humor isn’t just in the verses, it’s in the rollout, too. With a tongue-in-cheek nod to his Darkside and a shout-out to the Run ‘n’ Shoot Silver Stretch offense, Warford displays yet a few more skills nobody ever knew he had.

A one-time walk-on at tiny Los Medanos College who emerged into a thunderous Coyote playmaker in 2016, Warford’s freewheeling energy and infectious smile is evident in his deeply Christian music, where light always wins out over the darkness.

Catch Warford and all his teammates when the Coyotes open their World Developmental Football League season September 2, against the California Sharks at Shadow Hills Stadium. Kickoff is 1 p.m., and the game can be heard on ESPN 103.9 FM.