Home Uncategorized COYOTES AT SCORPIONS – THIS SATURDAY ON ESPN 103.9 FM 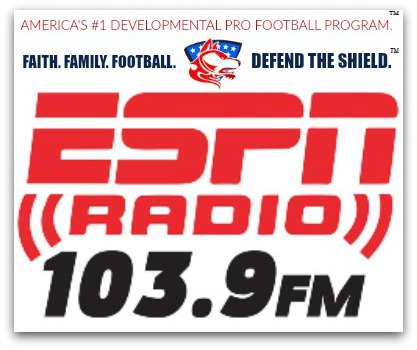 (SOBOBA) – ESPN Radio 103.9 FM will provide wall-to-wall game coverage of the SoCal Coyotes (4-0) on the road against the Los Angeles Scorpions this Saturday, September 30, with the official flagship of America’s #1 Developmental Pro Football Program™ also streaming live around the world.

Kickoff is 1 p.m., with Conrad Negron calling the play-by-play and ‘Slammin’ Sam Maggio providing color commentary. The contest also can be heard at www.1039espn.com via live stream. Anyone with a mobile device can catch the game, news, stats, rosters and more by simply downloading the free Coyote ‘YAPP.’ Download the Coyote ‘YAPP’ by searching ‘SoCal Coyotes’ on iTunes or Android Market.

The SoCal Coyotes are in the midst of a six-game round-robin tournament for bragging rights to the Pacific Coast Division of the World Developmental Football League.

The Coyotes went undefeated in 2016 for the second time in nine seasons. The most dominant sports brand in Coachella Valley history with more than 18,000 Facebook likes and followers, the Coyotes are 77-13 lifetime, with four championships since 2012 and a 24-game fall win streak that dates back to 2015.

ESPN 103.9 FM is the flagship of the SoCal Coyotes radio network.