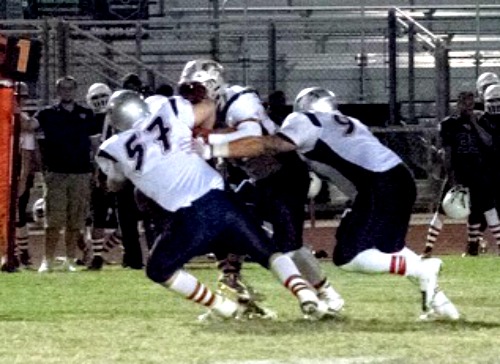 (INDIO) – Take’em out to deep water, then drown’em – that’s always the strategy for the ‘Darkside Defense’ of the five-time champion SoCal Coyotes.

With a roster packed with promising rookies, they turned to the leadership and splash plays of their relentless veterans to break the backs of The Bulldogs of San Diego in a 66-0 season-opening romp.

First came a vicious tackle for loss by all-everything linebacker Gary Young that backed the Bulldogs into the shadow of their goalposts. Second later, veteran Jake Sheffield blocked a punt and scored a touchdown.

On the next series, linebacker Will Hoglund, who had been flying to the football and dominating inside the box, snatched a San Diego screen pass from the sky and rumbled 37 yards for the score.

Tackles for loss by Jordan Warford and punishing run support from veteran safeties Ridge Turner and LeRon Wilson forced another stop. That led to a 35-yard Luis Castellanos field goal, and the Bulldogs were hopelessly behind faster than you  could spell trouble.

Meanwhile, a cast of rookie sensations were learning to play together. Starting cornerbacks Brandon Cole and Juvi Roberts, down linemen Travis O’Brien and Nick Long, linebackers Marquan Holloway and Marquis Dobbs all had strong showings in the Coyotes debut.

On the other side of the ball, the Coyotes offensive playmakers – who sputtered through the first quarter – finally caught fire and broke the game wide open. But at the end of the day, the ‘Darkside’ surrendered only 143 total yards, forced the Bulldogs into three turnovers, and put up four more scoreless quarters.

Knock on wood: It’s been nearly two years since an opponent scored on the Coyotes – October 16, 2016. They also haven’t lost a game since 2015, and will take a 28-game win streak into their showdown with the Cali Wolfpack at Whittier College on Sunday, September 23, at 2 p.m.