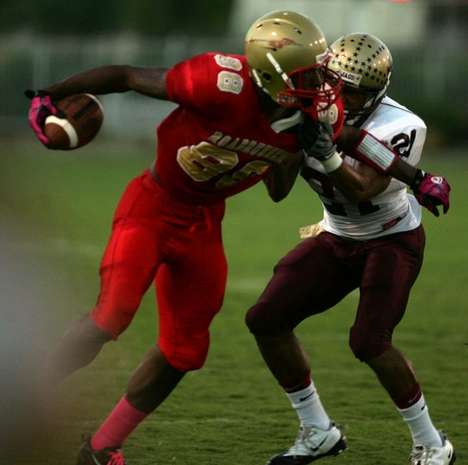 They were smiling about his ‘catch radius.’

“Looking at his film,” said assistant head coach Wayne Anderson Jr., “you can’t ignore the catch radius of a guy with a 7’2″ wingspan and a 36-inch vertical jump. Jordan will definitely put more ‘stretch’ in our Silver Stretch Run ‘n’ Shoot.”

This much is certain: Brewer, 23, can run like a deer,and locate and catch a football at points far higher than most humans.

A two-time Most Valuable Player at Carmel (IN) High School, Brewer led the Greyhounds to a state championship his senior year. He rolled up nearly 1,000 yards and 16 touchdowns at College of the Desert and was recruited by Purdue.

Recently, Brewer clocked a 4.4 with the Arena’s Cedar Rapids (IA) Titans, but chose instead to preserve his eligibility, get on a plane, and join the SoCal Coyotes for a season of AAA football with the desert champions.

“Jordan is a big-time D-1 player who had to overcome a few challenges to get here,” Coyotes head coach J. David Miller. “But when your mind is a hammer, all your problems look like nails. Jordan is a pretty big nail. He’s another great weapon in our arsenal.”

“This opportunity means a great deal to me,” Brewer said as he signed his contract. “I’m here for one reason — to help the Coyotes win a national championship, and I’m grateful that Coach Miller gave me the opportunity to be a part of such a great organization. Now it’s time to do my talking on the field.”

The Coyotes have one final practice left before the regular season. The team kicks off at 7 p.m. on August 24 against the #SanDiego Spartans in their first home game at Xavier College Prep and as a member of the UFAL Eastern Division of the Southern #California #Football Alliance (SCFA).

The Coyotes play the #national #champion #Inglewood #Blackhawks October 26. The SCFA is the only means for a desert team to win a state or national championship.