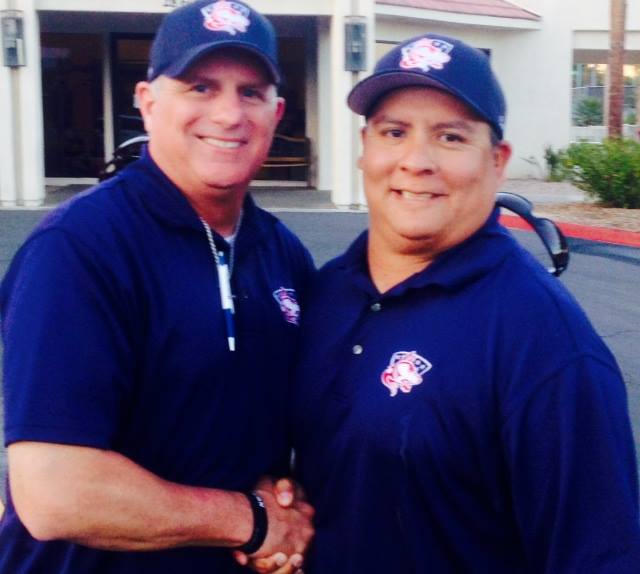 (CATHEDRAL CITY) — Promising that “we will be extremely aggressive, unpredictable and attack from all angles,” Shane Helms took the reins Monday morning as the new defensive coordinator of the SoCal Coyotes’ Darkside Defense.

The architect of a suffocating Hamilton High School (Anza) attack that only surrendered 21 points last season in league play, Helms takes over for Wayne Anderson Jr., who after two Coyote seasons returned to his hometown of Delray Beach, Florida, to serve as an assistant with the St. Petersburg Tide of the Professional Spring American Football League (PSAFL).

“The history of our Darkside Defense is built upon controlled fury,” said team president and head coach J David Miller. “Shane is a talented strategist and coach. Our defensive philosophy here is simple – get the football back in the hands of our Run ‘n’ Shoot offense so we can put up more points. Coach Helms is uniquely qualified to get us the ball back.”

“I want to thank Coach Miller for the opportunity to be part of the great SoCal Coyotes organization,” Helms said. “This entire organization operates under a championship mentality. Their philosophies and mission statement are ones I coach and live by.

“Our athletes will not just be competitive,” he vowed. “They will embody positive attitudes, work ethic and a willingness to sacrifice for the team. Rest assured that the men who come through this program will continue to be a great asset to anyone they work or play for, at any level.”

The Coyotes are one of four teams in the new PSAFL, which in its first season will play an intense four-game spring schedule with a championship in Tampa Bay. Combine-quality athletes will be showcased in competitive games and enjoy game film to market their skills. Fans, meanwhile, will enjoy entertaining spring football from thirsty players fighting for jobs in the NFL, CFL and AFL.

Helms stepped into the vacancy after a month-long interview process with Coyotes brass, and delivered a documented 19-year coaching pedigree sought by the two-time champions.

Certified by the National Football Academy, Helms is an accredited interscholastic coach with the National Federation of State High School Association. He has coached and assisted at Top Recruit/Reebok High School Combines, and served as a head coach, defensive coordinator or offensive/defensive assistant at various levels, including lengthy stays with two different schools — West Valley and Hamilton.

In addition, Helms, 40, holds NCAA Eligibility Center Coaching Education certification, as well as a degree in sports and health science, with a minor in business management.

After their spring campaign, the Coyotes will play a 10-game schedule this fall in the AAA National Developmental Professional Football League.