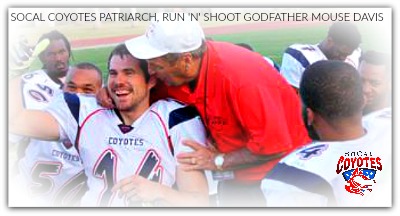 (SHADOW HILLS) – Darrel “Mouse” Davis, godfather of the Run ‘n’ Shoot and modern four-wide offense that revolutionized the game and sent Barry Sanders, Warren Moon and Jim Kelly to the NFL Hall of Fame, will join his protégé four-time champion SoCal Coyotes on their sidelines when they face Los Angeles.

Kickoff is 3 p.m. at Shadow Hills Stadium, and Davis will conduct the coin toss.

The Coyotes are a blueprint of Mouse Davis influence. Davis is a life-time mentor to head coach J David Miller and the patriarch of the SoCal Coyotes program, where he annually is a visitor to their sidelines, camps and initiatives.

The architect of the original Arena Football League with founder Jim Foster in 1987, Davis has been inducted into five Halls of Fame, including the NAIA Hall of Fame, Oregon Sports Hall of Fame, Western Oregon College of Education Hall of Fame, the Portland State Athletics Hall of Fame and the AAA Football Hall of Fame.

“We say around here that love is a four-letter word spelled T-I-M-E,” Miller said. “Since Mouse began coaching decades ago, he continues to invest time into thousands of lives. He has taught us so much – specifically, to ask yourself, ‘What am I doing with the opportunity directly in front of me?’ One snap, one moment, at a time. He has given direction to so many. Without Mouse, there is no Coyote football.”

Outside of football, Davis and Miller have worked together on a number of published books, and most recently, ‘The Mouse that Roars,’ an upcoming feature-length film. The movie documents how Davis engineered original Run ‘n’ Shoot schemes that have now – in some version – become the linchpin of every modern offense.

Miller’s original intention with the Coyotes was to have a post-modern finale for the movie, in which every Davis teaching philosophy and offensive scheme is proven timeless in new generations of youth. Well, proof positive: The Coyotes became far more than a movie footnote – they’ve matured into a full-blown, year-round, non-profit sports leadership organization, now affecting thousands of lives each year.

Now in their fourth year, the Coyotes play two seasons a year in two different leagues, have mentored over 400 players, and placed 56 in NFL, CFL or Arena camps. Coyote graduates dot the Coachella Valley business landscape in jobs ranging from entry level to corporate executives.

“This is all about helping the kids,” said Davis. “If we are creating and improving opportunities for players and having fun, there’s no downside. One young man at a time. You never know which one is going to be THE one. You gotta coach’em all. That’s the deal.”

Spring football is a training ground for an influx of rookies, and second-year players, but with Mouse in the house, don’t expect the Coyotes to let their legend down.

The last time the SoCal Coyotes, 64-12 lifetime, lost a regular-season game at home was September 18, 2013, in a 43-33 shootout with San Diego. They have lost at home only four times in history.