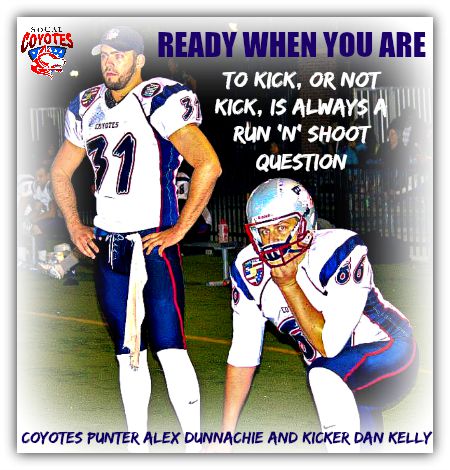 Brandon O’Neill, VP Program Development(PALM SPRINGS) – When the three-time champion SoCal Coyotes take the field at Shadow Hills later tonight against the San Diego Nighthawks, they will do so with arguably the most lethal kicking tandem that’s not in the NFL – and you might even get a chance to watch them perform.

Long-ball kicker Dan Kelly – the third all-time leading scorer in University of Hawaii history – holds every Coyote kicking record, including a 59-yard field goal. He has connected from 57, 55 and 54, and is virtually automatic inside 45 on his career. Alex Dunnachie – a ProKick Australia import – is the University of Hawaii’s all-time leading punter, and holds every Coyote punting record, including a long of 65, and a career net of 41.7.

But this season, the greatest challenge facing the powerful legs of this dynamic duo may not come from opponents. It might be – get this – a few simple mathematical equations, and the brazenness of a coaching staff that occasionally doesn’t want the other team to touch the ball. As in ever. Nada.

And it almost happened last week, when the Coyotes Silver Stretch Run ‘n’ Shoot exploded for 574 total yards and 76 points.

Historically, Kelly’s kickoffs result in touchbacks 55 percent of the time, or roughly half, of every Coyote kickoff attempt. In the Coyotes last 15 games, when Kelly does give the opponent a chance to return, their average start is their 34-yard line. Here’s where it gets weird. When Kelly onside kicks, the Coyotes “have a 50-50 chance of recovering,” says head coach J David Miller. And when the Coyotes don’t recover the onsides, their opponents average first-and-10 at their own 46.

That’s a net of 12 yards. Hence the reason Coach Miller called for onside kicks all but once in last week’s 76-6 pasting of the Cali Ryders, both to test these theories – and the enthusiasm, of the Coyotes kickoff hands team. “Judging by the thunderous hits, number of recoveries and screaming reckless abandon,” smiles Coach Miller, “our kids on the kickoff team had an absolute blast. It sounded like a block party.”

“Constant onside kicks and going for two aren’t conventional, but when you’re playing at the AAA level, neither is anything else,” laughs Kelly, who, in college at Hawaii, also had to patiently wait his turn playing in the Run ‘n’ Shoot, with quarterback Colt Brennan and maverick coach June Jones.

“Any opportunity we have to rest our defense or keep scoring is well worth the chance,” Kelly says. “Alex and I are like owning a weapon. Coach Miller has the safety of knowing I’m behind him, and so is Alex.”

That brings up those pesky fourth-down conversions. Coach Miller has long disdained punting, something instilled in his DNA decades ago from mentors June Jones and Mouse Davis. The Coyotes only punted 11 times in their first three seasons, 18 total prior to Dunnachie.

Over the past three seasons, the acquisition of Dunnachie from ProKick Australia has seemed to mellow Miller, abeit slightly, and perhaps because Dunnachie is so ridiculously good, and the field position he provides makes a powerful, open-and-shut case.

But last week, Coach Miller didn’t just revert to old habits. He threw any form of conventional football wisdom totally out the window, so much so that even June Jones – who once declared that his dream game is one without punts – would have blushed.

For starters, the Coyotes didn’t punt once. But the coup de gras occurred early in the third quarter. On fourth down, after a penalty-ridden drive, facing a ludicrous fourth-and-36. Miller sent quarterback Zach Adkins back to the huddle. “Why not?” reasons Miller. “We were on their 48. If we don’t get it, they start there. On our last kickoff (which the Coyotes didn’t recover), they started on their 46. That’s two net yards.”

Um, OK, whatever. But fourth and 36? Are you kidding me? While everyone in the stands – and frankly, the booth I was standing in – was shaking their heads, on the next snap, a scrambling Adkins rifled a 48-yard dart to receiver Stevie Will Jr. under the goal post for the touchdown, which deflated the Ryders for good, and probably added fuel to whatever fire is burning in Miller’s head.

Of course, the Coyotes then went for two, which they did all but once last Saturday. In tougher games, against tougher opponents, it’s likely the Coyotes will stick to fundamentals, and give assistant head coach Shane Helms fewer gray hairs and the ‘Darkside Defense’ more room to work and more Shield to Defend.

It’s a good thing that Dunnachie, and Kelly, are not only great athletes, but also among the best-humored and well-liked personalities on the team, or this might not be so funny.

“They know I love them,” says Coach Miller. “We count on them, and they deliver – big-time – when called upon.”

What about football etiquette, traditions, and, well, dare we bring up logic?

“Winning or losing, regardless of the score, we’re a Run ‘n’ Shoot team, and we’re always going to do what we think is best, which is usually aggressive, and not smiled upon by football purists,” says Coach Miller. “But Mouse taught me something a long time ago. The other team has no chance to win if we out-score them, and they can’t score if they don’t have the ball.”

HOWL FOR KELLY AND DUNNACHIE – Both Kelly and Dunnachie enjoy off-the-field full-time employment, success stories of the Coyotes Head of Household Work Leadership Program (HOWL). Both live, work and train in Temecula.

Kelly went through aggressive sales training earlier this spring with the Coyotes front office, before he quietly worked through the team’s non-profit HOWL program to find, develop — and now sustain – permanent employment with Refuge Brewery, the most successful brewery and tasting room in the Temecula Valley. Kelly was instrumental in helping Dunnachie do the same. Kelly was married last year (to Kelly Kelly, no less). Dunnachie – and girlfriend Nicole – were in his wedding, and it appears, might be on deck. Stay tuned.

“Alex and Dan are among the brightest examples of the Coyote program,” praises Coach Miller. “In their faith, in their homes, in their community, and within this organization, they are hitting on all cylinders. Around here, we applaud young men who love the Lord, treat women with respect, and have sustainable incomes with long-term plans.”