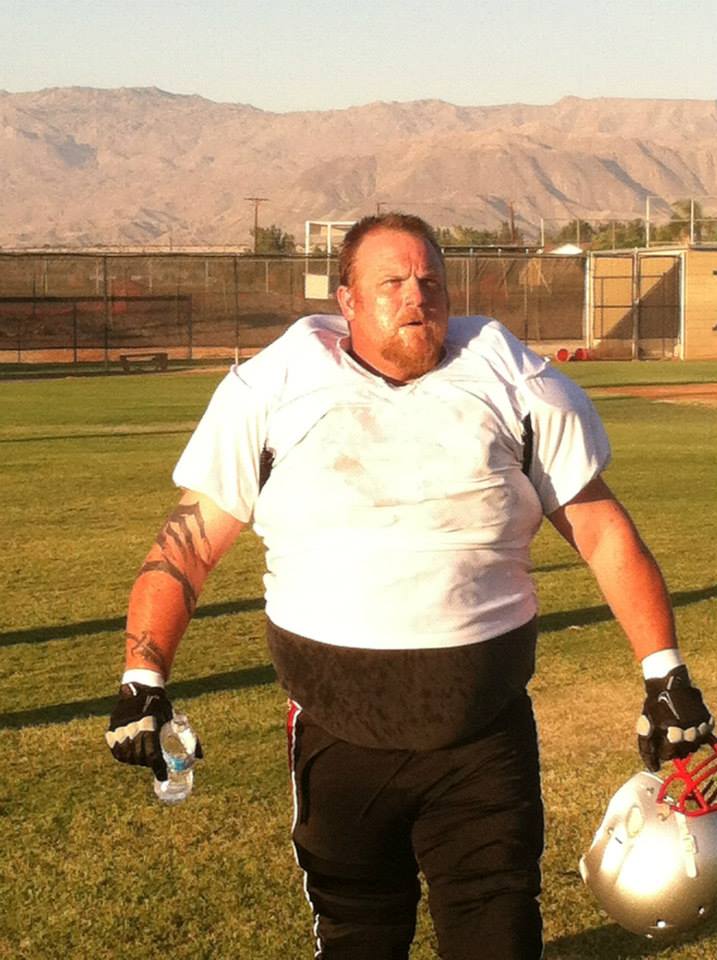 (PALM SPRINGS) – Loveable SoCal Coyotes center Brian “Porkchop” Gollnick said he was “just a skinny soccer kid” until his eighth birthday, when he ate an entire bone-in ham steak at Hamby’s diner, in Hemet, California “and discovered my true fatness.”

On Monday – 32 years later — the gregarious 330-pound ‪#‎legend‬, who was born on a Marine base in Camp Lejeune, will join superstars like ‪#‎JerryRice‬, ‪#‎GeorgeForeman‬ and ‪#‎RogerClemens‬ who still pursued ‪#‎greatness‬ after turning 40.

He has twice been selected to the All-USA National Team. In addition to anchoring the Coyotes offensive line, he cares for his mother Jane in Winchester, and manages accounts from Indio to Santa Barbara for Corona-based Top Notch Plumbing & Heating.

“Don’t let Chop fool you,” says Coyotes head coach J. David Miller. “This man is incredibly intelligent, sensitive, hard-working, and has a heart of gold. His ‪#‎commitment‬ is unmatched – he drives 100 miles a day to take care of his ‪#‎mom‬ and to play football. He works another 100 hours a week. He’d give you the shirt off his back.

“He’s passionate about everything he does. And even at his age, he continues to play superb football. If there was a Hall of Fame for Hall of Famers, he should be there.”

After a recent training camp practice – his 10th AAA season – the former Mt. San Jacinto College star sat down with a Wendy’s Triple Bacon Pretzel Cheeseburger in one hand, and an order of fries in the other. The affable ‘Porkchop’ reflected on what will be a AAA-Hall-of-Fame career, as well as some top culinary experiences.

Q: WHAT ‘S THE MOST POIGNANT THING ABOUT YOUR 40TH BIRTHDAY?
A: (Laughs) “I don’t understand that word, so I’m going to say I feel super-duper.”

Q. HOW DID YOU GET THE NAME ‘PORKCHOP’?
A: “I was smashing people at practice when I played for the Missoula Raptors. They started calling me ‘Porky Pig.’ They shortened it to Porkchop.”

Q: IS THERE A ‘MRS. PORKCHOP’ IN YOUR FUTURE?
A: “Naw. (Grins) I already tried marriage. I realized women only want me for my body. I want a woman who loves me for Brian, not just my body.”

Q: DESCRIBE YOUR DAY JOB.
A: “I’m a ‪#‎superhero‬. During the day, I climb around in attics and cool people off. You’ve never seen people excited until it’s 120 outside and you fix their air conditioning. I wear a hard hat with a ‘Super B’ on the front, like a shield with a ‘B’ in it. I look like John Goodman in Arachnophobia – ‘rock and roll!’

Q. WHAT DOES FOOTBALL MEAN TO YOU?
A: “Next to my ‪#‎God‬ and my #mom, everything. If you dug (former Pittsburgh Steelers legend Hall-of-Fame center) Mike Webster out of the ground, no way that dude loves football more than me. No way. I want to play until I die.”

Q. WHAT DOES IT MEAN TO ‘DEFEND THE SHIELD’?
A. “The same as the American flag. It’s everything I’ve worked for. You better be ready for a beat-down if you dishonor the Shield. I ‪#‎pray‬ now every day, too.”

Q: WHY DON’T YOU EAT SALADS?
A: “I didn’t work my way to the top of the food chain to eat what other food eats.”

Q. DO YOU HAVE ANY REGRETS IN YOUR LIFE?
A: “Well, I used to love bears. I wanted to go to Cal-Berkley, because they were the Bears. Then I shot one, skinned it, and ate it, and he tasted horrible. The worst part was skinning it. Once you get the fur off, they’re big humans – arms, legs, muscles and stuff. It was pretty gross. It was like skinning a dude. We still ate him, but he tasted awful. I’m still not over it completely. Now, moose was another story. Moose are awesome.”

Q: HOW DID YOU TRAIN FOR YOUR 10th PRO SEASON?
A: “The strawberry pop-tart ice-cream sandwiches at Carl’s Jr. are ridiculous good. I ate a bunch the other day, and I couldn’t wait to get back on the field.”

Q: HOW DO YOU WANT TO BE REMEMBERED?
A: “I don’t really care, as long as I’m remembered.”