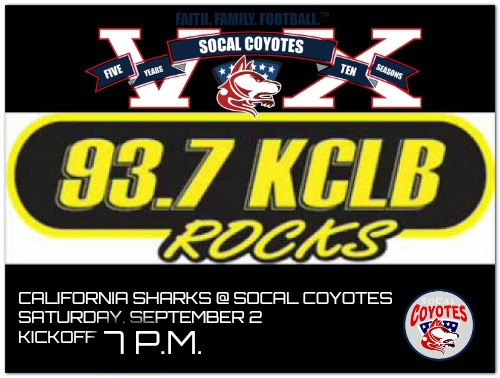 According to Nielsen ratings, 93.7 KCLB FM, a mainstream rock station, is one of the Coachella Valley’s top-ranked stations for men between the ages of 18-49, and the desert’s fourth-highest overall among all demographics. Alpha Media, which operates eight Coachella Valley radio stations, announced the switch today.

The Coyotes open the 2017 season against the California Sharks at their Shadow Hills home this Saturday at 7 p.m.

Marinovich, 48, the 1990 Rose Bowl champion 1991 first-round pick of the Los Angeles Raiders, will become the oldest starting quarterback in pro football history when he returns to action in his Coyote comeback.

The much-anticipated contest will also stream live around the globe at  www.937kclb.com, or through any mobile phone via the free Coyote ‘YAPP.’ Download the Coyote ‘YAPP’ by searching ‘SoCal Coyotes’ on iTunes or Android Market.