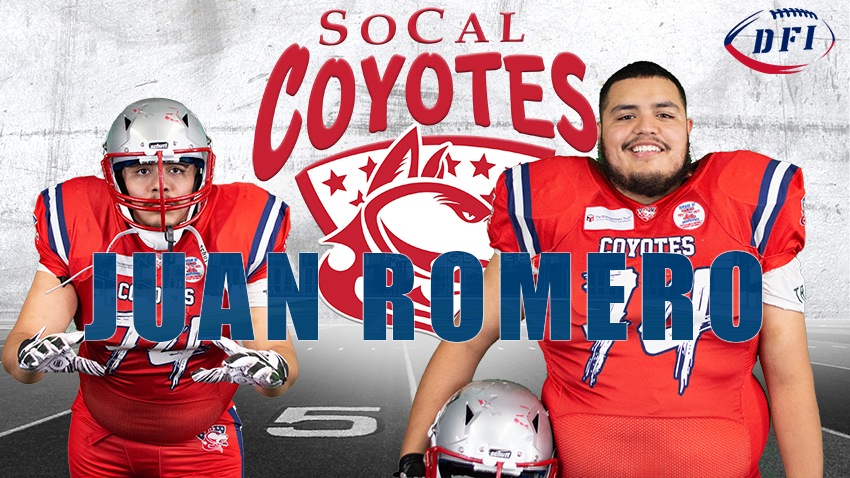 (PALM SPRINGS, Calif.) – SoCal star second-year offensive lineman Juan Romero has been named Offensive Player of the Year for the 2022 season – and in his honor the Coyotes’ non-profit organization made a donation to children with intellectual disabilities.

Romero – who had not been in pads for two years before signing with the Coyotes in 2021 – has not only revived his stalled career, but also blossomed into a formidable player in SoCal’s Run ‘n’ Shoot offense.

Off the field, his extensive community 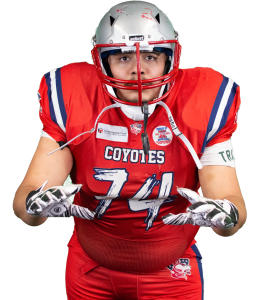 work with youth through the Coyotes’ award-winning  ‘Above the Line’ leadership programs has changed lives in schools across the desert.

A first-generation Mexican-American athlete in his family, Romero says he found his purpose again.

“In the two seasons I’ve played for the SoCal Coyotes, I have earned a spot at a professional combine, and will soon be attending another one for the XFL draft,” says Romero. “It is a testament of the ‘faith, family, football’ that the Coyotes stand for and believe in.”

Romero credits his meteoric growth to his faith in God, a loving family that supports him, and the team relationships he’s nurtured. “All three of these allow you to grow in the right direction,” he says. “That kind of foundation really allows for football to take care of itself.”

Romero played in a junior college campaign as an offensive lineman for three years following his high school career. After going undrafted and experiencing the constraints of Covid-19  lockdown, Romero said the Coyotes were his last shot to show he belongs on the field.

“The Coyotes gave me a chance to shine when I felt nobody else would because ‘my train passed’ – even though I’m barely 22 years old,” says Romero.

Romero excelled on both sides of the ball his rookie year, and in 2022, exploded into a dominating player that opposing teams had to account for at all times.

Aside from handing out pancakes on the offensive line, Romero recorded 9 tackles on defense, 2 tackles for loss, a sack, forced fumble, and a safety.

“Juan is very unselfish in his approach to the game, and his life,” praises head coach J David Miller. “Loves God. Loves people. Not o 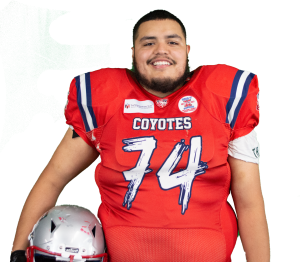 nly is he a dominant athlete, he’s a dominant man, friend, and leader in our community. If you poll the most respected players in the Coyote locker room – you’ll find Juan at the top of that list.”

Off the field, Romero equally has been a force of nature as a speaker, leader and counselor at the non-profit’s ‘Above the Line’ camps, clinics and symposia at schools throughout the Coachella Valley.

Still a nursing major at COD, “Juan is a reminder to those in the Coachella Valley that there is always opportunity here with the Coyotes,” notes SoCal GM Scott Alvarez.

“As an athlete, being able to climb the ranks – so to speak – of football is a blessing and a wakeup call at the same time,” Romero smiles. “First, it’s a sign that God gave me a way out of some of the tough things I’ve faced growing up.”

“But it’s all up to me to take full advantage of this opportunity to serve God, serve others, and change my life.”

The six-time champion SoCal Coyotes are the 2021 California Non-Profit of the Year, and the national standard of American developmental football. The Coyotes’ organization provides elite athletes a professional environment that refines and showcases their skills through trademarked processes similar to the NBA’s D-league and MLB’s minor-league systems.

LINEBACKER ZACH HUFF: ‘I KNOW GOD HAS A PLAN’