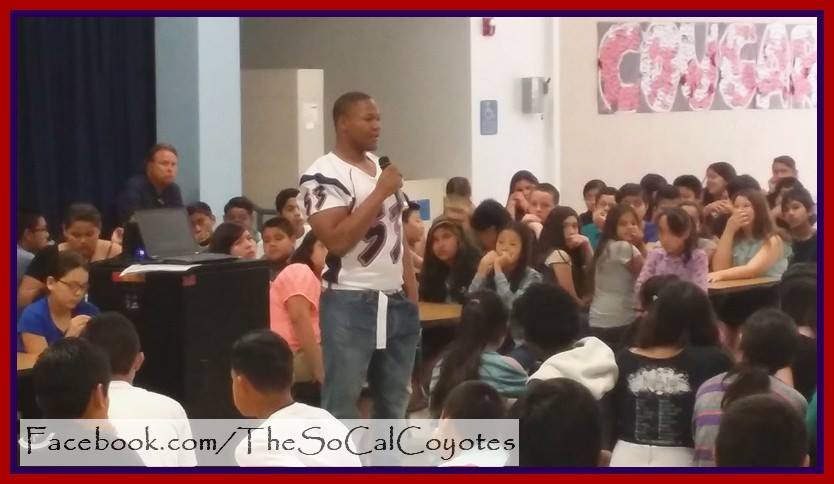 (CATHEDRAL CITY) — “I thought maybe if I became good at football, my mom would love me. Wherever she is.”
When 6-0, 240-pound, 23-year-old SoCal Coyotes rookie linebacker Jeremiah Spicer took the microphone recently during the team’s leadership symposium at Nellie N. Coffman Middle School, you could hear a pin drop.
Left in a garbage can as a child and raised in an orphanage, Spicer detailed a life on the unforgiving streets and in the homeless shelters of Los Angeles, where he railed against authority, hated school, and was nearly consumed by anger, rejection, fear and abandonment.
“I was angry,” he said. “I didn’t want to listen. I didn’t want to study. I didn’t want to learn. But life gets real and you can’t keep blaming other people. Statistics say I should be already dead or in prison. I finally realized the only thing in my life I could change was me.”
Football, he said, became his outlet. Spicer starred at Banning High School for head coach John Stockham, followed by an opportunity with Riverside Community College. Now a long-shot Coyote rookie, Spicer has already been compared to former Houston Oilers linebacker Eugene Seale by head coach J David Miller.
Seale was a member of the famed ‘replacements’ during the NFL strike in the 1990s, and went on to play six seasons for the Oilers.
“Jerry (Glanville) and June (Jones) literally took Eugene off a jackhammer,” says Miller, who worked with the legendary coaches at that time. “He had given up on football. He had given up on life. Like Jeremiah, life circumstances put Eugene on that jackhammer. But when opportunity knocked, he used all that rejection, anger and fear to his advantage.”
Seale made a name for himself during the 1987 strike. After asking Glanville’s permission to unleash all of his life’s frustration and “let my whole personality come out,” Seale knocked opponents unconscious in three consecutive games. After the Oilers were fined for his devastating hits, this prompted Glanville to joke that “I’m not sure we can afford Eugene’s entire personality.”
Now Spicer shares the same odds, and opportunity. He finds himself on a stacked ‘Darkside Defense’ that is rich with Division I skill as the Coyotes ready themselves for their first season in the National Developmental Professional Football League, a showcase for aspiring NFL talent. “
My whole life is on the line here,” Spicer says. “There were times when I felt my whole life was one big rejection. Now I can prove it’s not where you been. It’s where you going.”
Spicer will wear 33 in games, to coincide with Jeremiah 33:3, which reads, “Call unto Me, and I will answer thee, and show thee great and mighty things.”
“He’s young, he’s raw, but he’s got crazy speed for his size, and is downright nasty when he gets to the football,” says Miller. “We, too, are counting on Jeremiah for some great and mighty things.”
Last week, as scores of schoolchildren flocked around the young linebacker, hugging, mugging and high-fiving, it was evident something great had already begun.
–GM Sam Maggio
Load More Related Articles
Load More By TSCC
Load More In PACK ATTACKS
Click To Comment