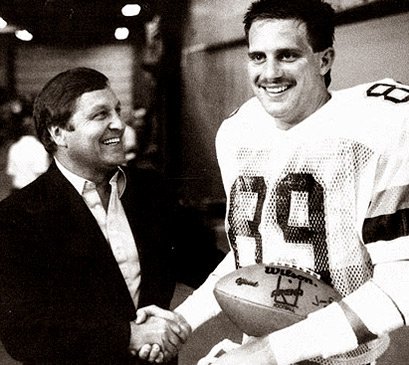 (PALM SPRINGS) – It’s an unlikely script, even for an author.

When the AAA Minor League Football Hall of Fame inducts SoCal Coyotes head coach J. David Miller on January 10, 2014, for his “30-year contribution to the sport as a player, author, executive, administrator and coach,” none other than his mentor Darrel “Mouse” Davis will present him.

“I don’t deserve to share a stage with Mouse,” Miller says reverently. “That’s like having your picture taken at Mount Rushmore and calling yourself a president. Mouse Davis never gave up on me. He has given me and countless others so much, while asking for nothing in return. He showed me that true relationships multiply your joy. He taught me that enthusiasm and positive reinforcement can turn average people into winners, and turn hopeless situations into glorious platforms of opportunity.

“God chooses who walks into our lives, but it’s up to us who we let walk away, and who we refuse to let go.  Ultimately, this man taught me that the way to shut up the crowd is throw touchdowns. And smile while you’re doing it.”

The paths of Mouse and Miller were inseparably crossed in 1984, when the latter was discovering the Run ‘n’ Shoot for a cover story for SPORT magazine. For three decades, Davis has mentored Miller as a father-figure, player and coach, while serving as an inspiration for at least five of his 13 books.

“These two men represent the best about the game of football,” said AAA HOF Commissioner Dick Suess. “David was smart enough to listen and make it his life mission to learn everything he could from Mouse, one of the greatest coaches our sport has ever known. Now he has his own legacy to back it up.”

In his past two seasons, Miller made quarterback Nate Lewis and the AAA SoCal Coyotes the most prolific Run ‘n’ Shoot team since Jim Kelly and the Houston Gamblers in 1984. Miller was the AAA 2012 National Coach of the Year before becoming a 2013 AAA Hall-of-Fame inductee. Before becoming head coach and president of the Coyotes, Miller worked and coached at every level.

Miller is the former Senior Vice President with the five-time World Champion Tampa Bay Storm of the Arena Football League under Tim Marcum, the league’s all-time winningest coach. Shane Stafford, his quarterback in Tampa Bay, worked with Lewis during his run-up to making camp with the San Jose Sabercats. He, too, will be in attendance at the Awards dinner.

“I have tremendous respect for J. David and everything about the man, and he always credits his success back to Mouse,” says Stafford, who retired as one of the Arena Football League’s all-time greatest passers. “When you go into battle, those are two guys you want beside you.”

Miller’s coaching record is 74-15 (.840 winning percentage). Miller played briefly under Western PA Hall of Famer Joe Haering with the Pittsburgh Gladiators in the Arena Football League during the 1987-89 seasons.

As a producer and author, Miller has written 13 books, including his latest with Dr. Jerry Argovitz, Super Agent: The One Book the NFL and NCAA Doesn’t Want You to Read (in major bookstores now). He has collaborated with notable NFL coaches such as Hall of Famer Hank Stram and Jerry Glanville, and Southern Methodist University’s June Jones.

Jones and Miller have enjoyed a rich friendship since they met when June was an assistant to Mouse in 1984. Together they wrote the best-selling Hawaii Warrior Football: A Story of Faith, Hope and Redemption. The book, which chronicles the decade-long success Jones had at Hawaii, has become a textbook template for coaches, who seek out the Run ‘n’ Shoot, Mouse Davis and June Jones for worst-to-first philosophy.

“I know that book has opened eyes around the world,” says Coyotes assistant head coach Wayne Anderson Jr., whose own coaching career spans 25 years, three colleges, five pro teams and four countries. “My wife Kathryn bought me the book when I was in Rome in 2008. Now I’m living it. David and I have a mutual love for the Lord, Coach Davis, and the Run ‘n’ Shoot, and it’s amazing how many lives have been affected by all this.”

Miller spent three years working with University of South Carolina Athletics Director and three-time, NCAA  Coach of the Year Ray Tanner on “Carolina Baseball: Pressure Makes Diamonds,” along with close friend, confidante and co-author Ron Kule, who also will be in attendance.

“David and I forged our friendship from the fire-walk of researching and writing our book,” says Kule. “He mentored me with what he calls ‘Mouse-isms,’ or timeless principles that work as well off the field as on. For him, writing a book is no different than running the Run ‘n Shoot – expect to score points on every page, every paragraph and every sentence — otherwise, who cares?  Run to space, fill them with excellence, and the rest takes care of itself (laughs).”

“Without Mouse,” he says, “I don’t meet June. I don’t play or work in the Arena Football League under Joe Haering and Tim Marcum, two of the all-time greatest coaches. I don’t coach at any level, and half of my books never exist. We are only as good as the people we choose to follow.”

Miller, who is producing a documentary film about his mentor entitled, The Mouse that Roars, annually dedicates the Coyotes offense – the pure Run ‘n’ Shoot – to Davis personally. Davis has been hands-on with Miller in the development of Lewis, who has become the nation’s most successful AAA quarterback in history. “The least I can do is give the credit for this football team back to Mouse,” Miller says.

Mark Lane, of Chattanooga, Tennessee, who played quarterback for Miller in high school, still speaks weekly with his old coach, another Davis tradition. In fact, Miller insists his quarterbacks – now spanning three generations – all talk to Mouse and each other, and compare notes.

“We’ve all changed because of Mouse, and David,” says Lane. “It’s not just X’s and O’s. It’s the belief system. These guys spit in the face of history and make you believe you can change it. The first thing David did back then was introduce Mouse. Then he took us down to Atlanta to meet June, who was coaching the Falcons. That’s life-changing stuff.

“I played for David 20 years ago, but in his mind, I’m still 17 years old. On our last phone call, he asked me what I’d do if they blitz two, drop one and roll the safety over the top. Then, in his next question, he asked me about my family and told me to hug my mom.”

What was the answer to Miller’s question?

“If they blitz, we score,” says Lane, chuckling, “and that’s the Mouse Davis rule.”

(Seats to the AAA Minor League Football Hall of Fame Awards are limited. Tickets to the event are $50, $10 for children 12 and under. To reserve seats, email your seating request to [email protected]. )