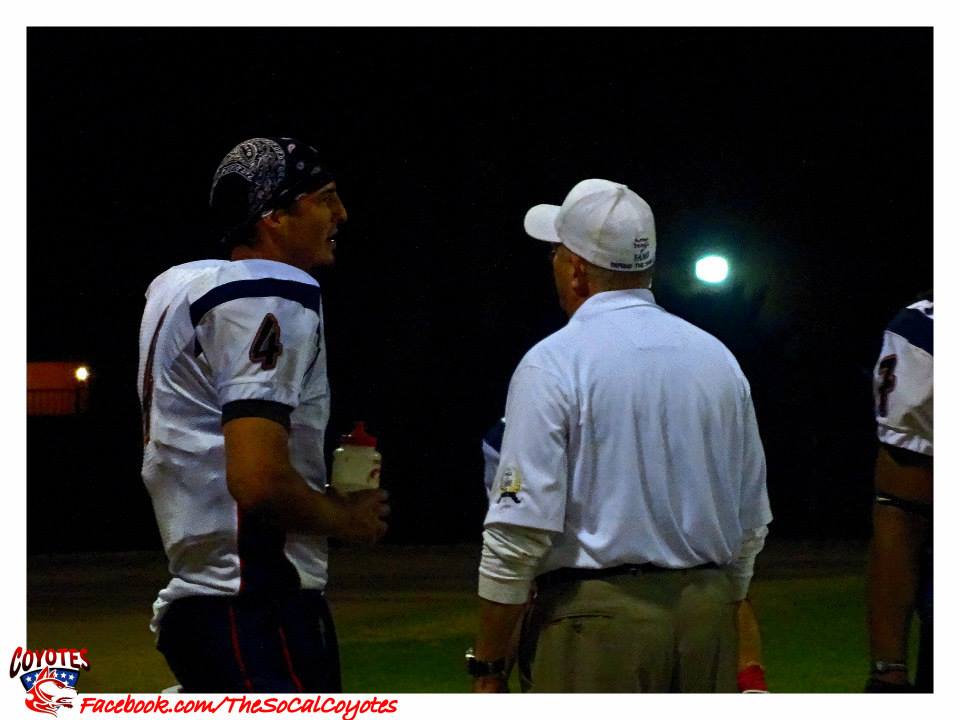 By Spencer Lee
(PALM SPRINGS) — SoCal Coyotes head coach and president J. David Miller — who was given peer-review recognition today for his efforts — instead used the opportunity to heap praise on his coaches, players and executive staff.

“I’m just lucky to be here – this staff deserves 100 percent of the credit.” said Miller of the UFAL (SFCA) Eastern Division Champion Coyotes, who was named today as “Offensive Coach of the Year” by Semi-Pro Talk, a media forum for Southern California AAA football.

“For me to take an ounce of credit would be cheating the men and women of the Coyote organization who work tirelessly and often anonymously in a relentless effort to change the culture of AAA football.”

Miller swiftly thanked assistant head coach Wayne Anderson Jr., who commutes 3,000 miles from Delray Beach, Florida, to serve as his chief aide, and executive vice president Kerry Ryan, who relocated from Orange County, to head the Coyotes administration, as the primary reasons for his team’s “seamless efforts on and off the field. People forget we’ve played 24 games already — spring and fall — in 2013 alone.”

Other staff personnel, whom Miller coined as “behind-the-scenes warriors,” include:

“It also took every player on our roster, whether they played one snap or 100, to get us through a great season at the highest level of competition in Southern California,” he added.

“Without all of their collective efforts, be it in practice or the biggest battles, we couldn’t have played the nation’s toughest schedule, beaten four of the eight playoff teams, or defeated our former division champion on their home field. Jerry Glanville taught me years ago that great players make great coaches, and I’m proud of the selfless and loyal commitment each of our players made with their time, preparation and incredible self-discipline.”

The Coyotes had two players reach NFL workouts in mid-season, and the team has Arena Football League (1) workouts scheduled for more at season’s end.

When asked if his staff met the ambitious goals set by the Coyotes for year three of his five-year plan, Miller smiled.

“The men and women on this staff set standards that were major league, by any stretch of the imagination,” the coach said. “I can name a half-dozen Arena teams who don’t have a mobile app, billboards, or over 1 million documented visitors to their corporate website, not to mention their Facebook page, in 10 calendar months.

“Our message of #faith, #family and #football touched hearts with charities, schools, churches and volunteer organizations throughout the Coachella Valley. Behind every one of those efforts was a member of this staff who refused to take ‘no’ for an answer, and I am grateful for the progress and impact they had. We certainly gained traction and have something solid on which to build.”

Miller profusely thanked the team’s 22 corporate sponsors, who allowed the Coyotes to operate “in an atmosphere that rivals that of any Arena football experience, which many of our players will soon discover.”

But – bottom line — for the Coyotes to earn another honor based on their Run ‘n’ Shoot ‘Silver Stretch’ offense is just more evidence of the impact that team mentor Darrel “Mouse” Davis, godfather of the modern spread offense, has had on the Coyotes coaching staff and players.

“To know Mouse is always just a phone call away makes everything we do here worth the effort,” said Miller. “The ‘Coyote way’ all started with Mouse.”

The Coyotes face the San Diego Thunder at historic Balboa Stadium of San Diego High School this Saturday night at 7 p.m. in the first round of the Southern California Football Alliance playoffs.