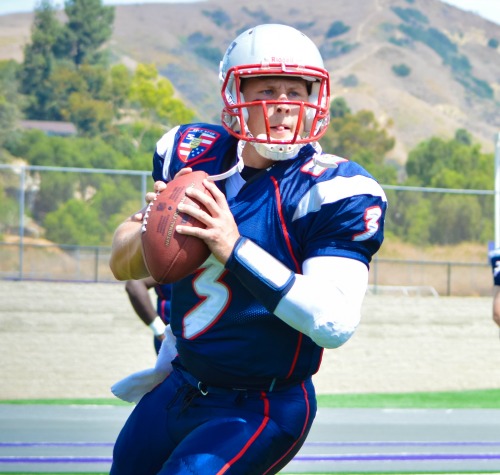 (INDIO) – The idea does not go away that SoCal Coyotes quarterback Michael Karls can simply will a football into the end zone. Regardless of down or distance last week, Karls delivered on the promise that something larger than life may occur any second when he’s at the helm of the Coyotes Run ‘n’ Shoot.

In a dizzying season reserved for the comeback of Todd Marinovich, sidelined for now with a sore shoulder, it’s the veteran Karls who has implausibly stepped back into the spotlight to make his very plausible case that he is a Canadian Football League quarterback prospect, if ever there was one.

He added another 403 yards last week, to be exact, and six touchdowns, with zero mistakes and zero turnovers. But that does not begin to explain the kid’s sack-ducking magic, or his high-stepping theatrics, or his pinpoint accuracy.

Last Saturday Karls conducted another Run ‘n’ Shoot symphony, whether he was dancing away from pressure, racing for the pylon, or rocketing perfect darts through passing lanes the size of a moving sunroof window.

He has come of age in America’s #1 Developmental Football Program™. Karls completed 70 percent of his passes to eight different receivers in last week’s 54-0 win over the Los Angeles Scorpions. His stunning afternoon moved him to second all-time in the SoCal Coyotes record books, with 4,487 career yards and 65 touchdowns.

Schooled by the Coyote program, Karls learned the offense trial-by-fire from head coach J David Miller, who in 2015 put the young quarterback through camp directly under the tutelage of Run ‘n’ Shoot godfather Mouse Davis himself. Karls now teaches the system as the offensive coordinator at Xavier College Preparatory.

Imagine being a high school quarterback, and your position coach can actually walk his talk. Lifetime, Karls’ NFL passer rating is 129.7. He averages nearly 15 yards a throw, rarely turns the ball over (12-1 TD-INT ratio), and wins nine out of every 10 times he steps on the field. He is somehow the embodiment of all those coaching clichés that sound so well when they’re spoken, but usually echo in a hollow room.

Ball placement. Intelligence. Field awareness. Command of the offense. Most of all, winner.

Somehow, Karls makes all that stuff work, just as he has since he first donned a helmet when he was eight years old. From five-time Friday Night Lights Player of the Week at Palm Springs High School, to record-setter at Midland University, Karls’ work ethic and overwhelming confidence has again and again melted all doubts and overcome all peers.

“In the huddle,” says wide receiver Matt Arias, “we believe in every play, because I guarantee you Mike believes in every play.”

Karls will get his second start of the season this Saturday, September 16, at 1 p.m. at Shadow Hills Stadium.