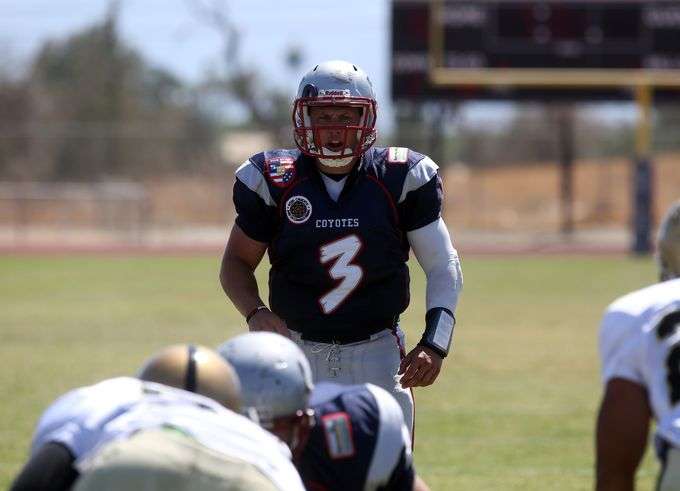 (INDIO) – When playmaker Michael Karls called a meeting recently at the Desert Princess Golf & Country Club to sit down with senior management and the coaching staff of the five-time champion SoCal Coyotes, the franchise quarterback got straight to the point.

“I’m the best quarterback anywhere, and you can print that,” he said matter-of-factly, as the confident, muscled signal-caller signed his Coyote contract for 2018 play in Developmental Football International.

Um, OK, – and wow. That’s a far cry from the wide-eyed rookie he was back in 2014, when Karls, fresh off his record-setting senior season at Midland University, began his Coyote career as a backup to legend Nate ‘The Sheriff’ Lewis.

That season, Karls volunteered at slotback and covered kickoffs to get on the field.

Karls is a deputy no more. The Run ‘n’ Shoot star enters the 2018 season with the goal of not only becoming the number-one passer in Coyotes history, but also “to prove I’m the best available quarterback, period, anywhere in the world,” Karls told coaches.

That’s the last thing Coyotes opponents need to hear. It’s a bold comment, though not surprising from a Run ‘n’ Shoot quarterback. Jim Kelly, in 1984, famously prophesied that “nobody can stop this offense … except God.”

Karls has put up the numbers to back up his Kelly-esque confidence. He is the Coyotes’ second all-time leading passer with 5,138 yards and 72 touchdowns. He has set his sights on the seemingly insurmountable 10,027 yards and 98 touchdowns set by Lewis, who also won a club-record 32 games.

“Let’s get it,” Karls said. “Like Mouse says, ‘Show me the points.’ The only way to shut up your critics is throw touchdowns.”

In Coyote history, few have deployed the range of skills in complex situations as Michael Karls. Coyote quarterbacks must be ‘lieutenant colonels’ who function as provincial coaches. Karls brings a total command of the Coyotes entire Run ‘n’ Shoot playbook, and is unafraid to use every page of its complex demands and schemes. 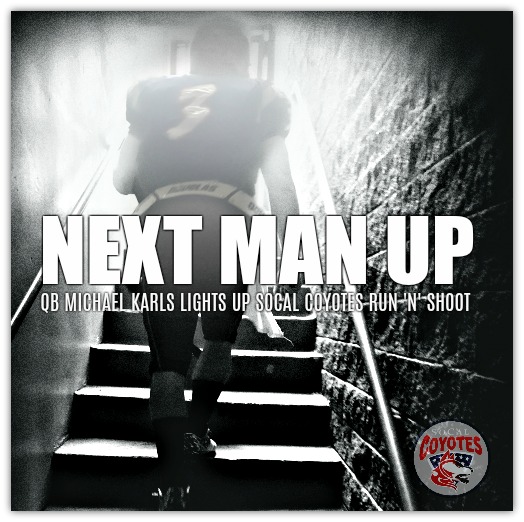 “It was mind-blowing to learn from Mouse, first generation,” says Karls. “I was listening, learning, throwing, and the whole time thinking, ‘I’m getting the exact same thing he taught Jim Kelly, June Jones, Neil Lomax, Jeff George, Colt Brennan’ … it was humbling.”

Karls, who stays just a cell phone call away from Mouse, now teaches the system as the offensive coordinator at Xavier College Preparatory.

When Karls goes under center, fans expect an all-out assault, from land, air and RPOs in between.

“Michael is a clean, consummate quarterback,” says Coach Miller. “He doesn’t turn the ball over. He is surgical in his approach. He’s a thinker, a leader. Mike has the confidence, the courage, the ideas to attack teams with flexibility, creativity, independently.

“How do you stop him, when even we don’t know what he’s thinking?”