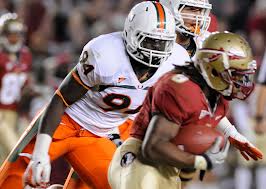 (PALM SPRINGS) — The two-time champion SoCal Coyotes added their second University of Miami Hurricane to a roster steeped in talent when they came to terms today with defensive lineman/linebacker Kelvin Cain.The 6-4, 250-pound Cain will report May 10, the day after graduating from the University of Miami. He rejoins former all-ACC punter and ‘Cane teammate Dalton Botts.“The addition of Kelvin gives us three young, dominant defensive linemen who are just remarkable athletes,” said head coach J David Miller. “Kelvin has the talent to be great, with a combination of power and unbelievable speed, either in coverage or off the edge.”Speed, indeed. Cain had a 59-yard TD interception return against Bethune-Cookman as a junior. In high school, he returned kickoffs, including eight as a senior for 150 yards.The Miami letterman had breakout games last season against 12th-ranked Florida and a comeback win over North Carolina.

“To play for the Coyotes means everything for me at this point in my career,” Cain said this morning.

The Clovis, California, native is also a former teammate of Coyote S-back Nigel Simmons at Buchanan High School, where he was ranked as the No. 10 linebacker in the state.

THE COYOTES ARE PREPARING for their first season in the Professional Spring American Football League, and Cain joins a roster of stunning blue-chip Division-1 talent and depth at every position.