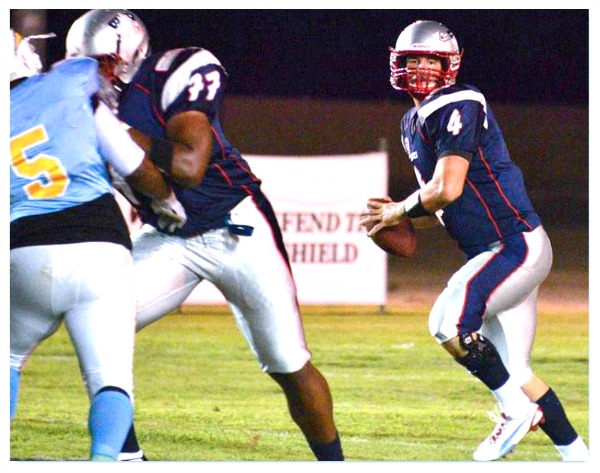 Over nine seasons, the four-time champion Coyotes have led six different minor professional leagues in total offense, and likewise, their quarterbacks over that span are far and away the most productive in the country.

Head coach J David Miller demands a winning formula – at least a 60-percent completion average; a 4-1 TD-INT ratio; an average of 300 yards-per-game; and an average completion of 15-plus.

“Of course, intelligence is a prerequisite,” Miller says, “before we give you the keys to the car.”

You be the judge.

-Nate Lewis (Dixie State), the Coyotes first quarterback (2012-14), originally set every club record, and still holds three – career yards (10,027), total victories (32) and career touchdowns (98). Over three seasons, Lewis, 6-5, 230, led the Coyotes to two of their four titles. He remains ‘The Sheriff’ in Coyote lore, and was the first to sign a next-level pro contract, appearing briefly with the San Jose Sabercats.

-An injury to Karls cracked the door for heralded NCAA record-setter Zach Adkins (Northwestern State) in fall 2015. Adkins, 6-1, 215, answered with a championship season, behind a team record 13-straight wins. Adkins shattered 13 franchise records in a 4,343-yard, 64-touchdown barrage – against just four interceptions. Adkins’ Coyote resume includes high scores of 107-0 and 102-0, and 11 touchdowns in a single game.

-In 2016, NAIA National Player of the Year Jacob Russell (Campbellsville University), 6-4, 235, earned the job as a rookie, and broke or tied seven franchise marks en route to a perfect 7-0 season. The Coyotes finished as the only California team ranked in the national Top 20, thanks in part to Russell’s dazzling 67-percent passing, 35-2 TD-INT ratio and a 134.1 NFL QB rating – all club records.

Every Coyote quarterback has one common denominator: WR Rashad ‘The Franchise’ Roberts, who holds every team receiving record, including 90 touchdowns, for 6,089 career yards.

Another irony? The Coyotes have also led every league in rushing. Their single backs, who rely on quick-hitting draws, traps, screens and shovels, average 5.9 yards a carry.