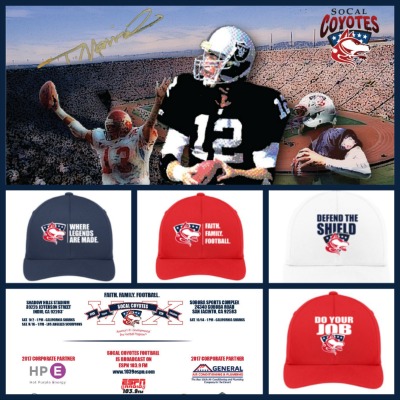 The humble return of Todd Marinovich to the game of pro football and the SoCal Coyotes is a living miracle – both for him and his fans who have followed him since he was a child prodigy. His life now a lesson to millions of youth on the cunning, baffling, destructive forces of addiction, Marinovich and his compelling ‘Faith, Family & Football’ comeback delivers a message of powerful hope and redemption to everyone who has ever personally prayed for a ‘do-over’ in life.

Support the ministry of The SoCal Coyotes – and Own a Piece of Pro Football History. ‘Marinovich Miracle’ Autographed Commemorative Comeback Season Tickets – with your choice of Limited Edition Port Authority SoCal Coyote Hat – is yours for a one-time donation of just $30. This limited offer is good through August 12 and hats and tickets will ship in time for the Coyotes home opener.

All hats come in your choice of color – Coyote Nautical Blue; White; and Red.

Limited Edition Inscriptions  include your choice of ‘Defend the Shield,’ ‘Do Your Job,’ ‘Faith, Family, Football,’ or ‘Where Legends Are Made.’

Every donation for your Limited Edition Coyotes Port Authority Hat includes a suitable-for-framing Todd Marinovich Autographed Comeback Season Ticket Card that allows family-style entrance of up to 6 people per card.

Each card is good for three Coyote home games, and the Pacific Coast Division Championship of the World Developmental Football League.

His passionate return also marks the start of the SoCal Coyotes Commemorative 10th season. The perennial champions seek a fifth title after a perfect 7-0 season in 2016.

All proceeds support the national outreach efforts of the SoCal Coyotes Non-Profit Organization. Coyote leadership camps, clinics, curriculum and awareness programs annually affect upwards of 30,000 youth, and are widely praised and recognized by educators, law enforcement, and government officials as a beacon of hope in the Coachella Valley region and beyond.