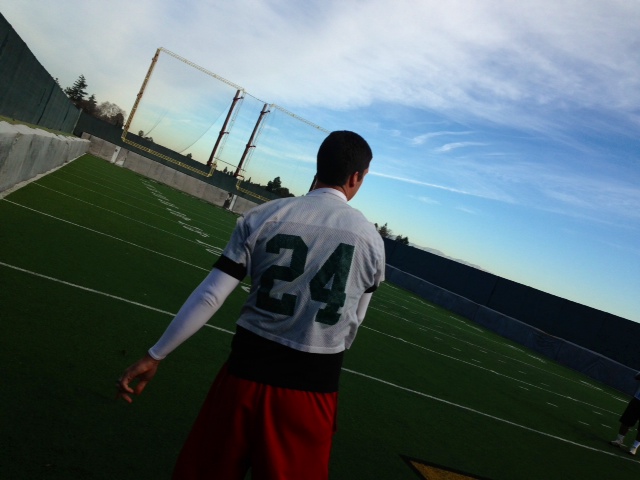 (STOCKTON) — When Winston Churchill famously said that “it’s not the critics who count, but the man in the Arena,” he had no idea how precious those words would be to long-shot Coyote-turned-Sabercat quarterback Nate Lewis.

Lewis, who signed a free-agent contract with San Jose, will make his Arena Football League debut tonight in an exhibition game against the Chicago Rush at the Stockton Arena at 6 p.m.

Given “the keys to the car” by the SoCal Coyotes and their Mouse Davis-engineered Run ‘n’ Shoot offense, Lewis became the AAA 2012 National Player of the Year, setting passing records for yards, completions and touchdowns, and led the team to a Pac West title.

Tonight, his pro football odyssey continues as a back-up to future Arena Hall of Famer Aaron Garcia, while he battles USC’s Mitch Mustain for the number-two job.

“All of Coyote nation is pulling for Nate to make the Sabercats final roster,” said SoCal head coach J. David Miller this afternoon. “But regardless what happens, Nate is a warrior who won’t spend the rest of his life wondering what might have happened if only he’d worked a little harder. Nate Lewis has given this game his all. He is the consummate competitor. He deserves to be playing in that league.”

Coyote coaches heavily promote their players through a network of Arena, NFL and CFL relationships. Lewis took full advantage of the opportunity and (among others) was invited to a tryout camp, eventually signing a free-agent contract.

Since the team’s inception in 2012, the SoCal Coyotes will be the only team in the Pac West or the Wild West Football Leagues to have a player appear in an AFL game.