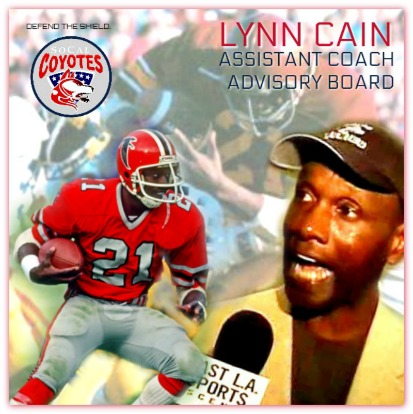 (INDIO) – Atlanta Falcons great Lynn Cain, a starting fullback on the 1979 University of Southern California National Champions and former head coach of East Los Angeles College, has joined the Advisory Board of the SoCal Coyotes, and will serve as an assistant coach with America’s #1 Developmental Football Program™.

“Lynn embodies integrity, humility, kindness and moral courage,” said head coach J David Miller. “He is a patient teacher and coach. Our staff and athletes will benefit immediately from the inner strength and wisdom of this prayer warrior. Coach Cain is a leader of men.”

Cain will report with the coaching staff and players on August 10. He will be on the practice field with the Coyotes at their Shadow Hills training complex when the team opens two-a-days, Saturday, August 12.

“There has never been a greater cry in our nation for the development of young men,” said Cain, upon his appointment. “The Coyotes are defining developmental football as a means of defining men. Real football, real champions, real men. We have an opportunity here with the Coyotes to demonstrate to the NFL a model of significance, one that works both outside on the player, and inside the man.

“The real battle must be fought and won in our communities,” Cain said. “In our homes, in our relationships. We must be committed to teaching and impacting the lives of young athletes as they evolve to be responsible fathers, husbands, and mold the framework of our communities. It’s an honor to join the Coyotes in this very real crusade of faith, family and football.”

The popular Cain, named to the “Top 50 All-Time Falcons” team, played for Atlanta from 1979-84, and with the Los Angeles Rams in 1985. He shared his college backfield with Heisman Trophy winner Charles White.

Cain coached five years at East Los Angeles College, his junior college alma mater, where he restored a winning tradition and community pride. When the Huskies won a division championship in 2011, it had been 37 years since East Los Angeles had won a title – when Cain was the MVP, on the same field, at Weingart Stadium.

With the Coyotes, Cain will be reunited with All-Century USC lineman Brad Budde, a Coyote advisory board member who once paved the way for Cain and White during their legendary reign on perhaps the greatest Trojan teams of all-time.

“The pivotal point in my life was understanding the responsibility for the people who follow you,” Cain said. He cited a verse from a poem frequently shared by UCLA basketball legend John Wooden, on the building of men.

“A Careful Man I Want To Be

… a little fellow follows me.

“I do not dare to go astray,

“I cannot once escape his eyes.
Whatever he sees me do he tries.

“He knows that I am big and fine —
And believes in every word of mine.

The uncle of Black Eyed Peas rapper/singer/producer, will.i.am, Cain is married to bride Lisa Gordon Cain, a humanitarian. They have three children together – son Lynell Cain and daughters Desiree Jacobs and Ariyan Gant.

The couple also have four grandchildren – Damon and Raven Cain, and David and Dawson Jacobs.

DISCOVER HOW SoCal Coyotes mentors and board members make a difference – click here.