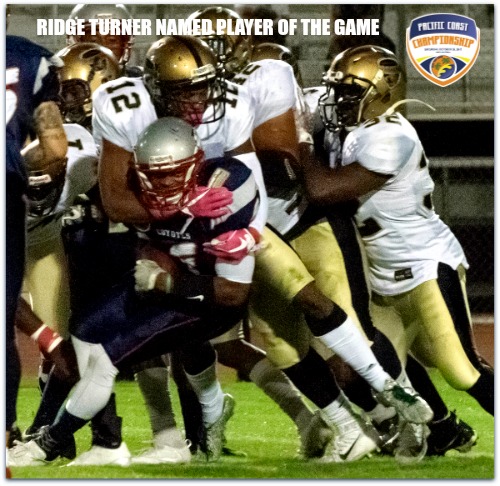 (INDIO) – In a surprise start at quarterback in SoCal’s Run ‘n’ Shoot offense Saturday night, West Alabama star cornerback Ridge Turner stung the Los Angeles Scorpions with six scoring drives on the ground and through the air to earn ‘Player of the Game’ honors – and deliver the Coyotes their fifth championship in five years. 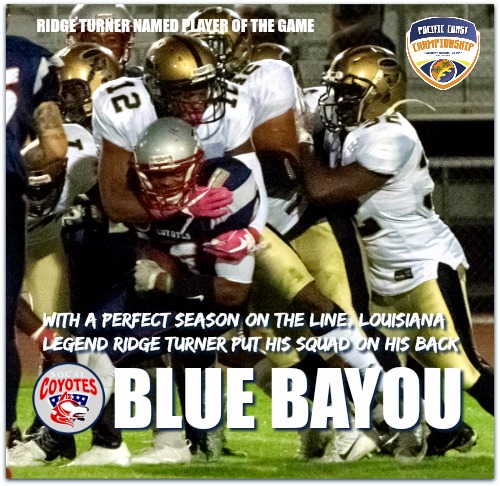 As Turner blew by the Scorpions in Saturday night’s Pacific Coast Championship, none of the folks listening to the live ESPN stream in Louisiana were the least bit surprised.

When he starred at South Plaquemines High School in Port Sulphur, Louisiana, he blew by everybody.

After Hurricane Katrina and living out of a leaky FEMA trailer, Turner produced numbers that are still Louisiana legend, the subject of a New York Times series and eventually a best-selling book, where he adorns the cover. As a starting quarterback, Turner went 26-2 and won two straight state titles. His ridiculous 5,549 yards as a junior remain a state record.

One of the most coveted state prospects as a senior, Ridge finished as the All-State MVP with 175 career touchdowns. In the state championship, his 80-yard interception return for a touchdown and the Hurricanes 62 points and 576 total yards were Superdome high school records.

Turner’s staggering 12,751 yards of total offense are second in Louisiana state prep history. In track, he still holds records in the 4×100 relay and the 300-meter hurdles.

A fortuitous route landed Turner with the SoCal Coyotes in 2015, where he has overcome injuries and personal challenges to become a force for good on and off the field. Turner has coached youth clinics at Desert Strength Academy, toured local middle schools as a motivational speaker, and encouraged at-risk youthful offenders to turn their lives around.

This fall, he earned an assistant coaching job at Coachella Valley High School, where he helped head coach Brett Davis win a league championship the very night before his start at quarterback for the Coyotes.

With his squad on his back, Turner brilliantly managed the game, called his own plays, and broke the contest open as the Coyotes rolled to a 50-0 Pacific Coast Championship of the World Developmental Football League.

Another remarkable outcome from a young man whose birth certificate, under ‘father,’ is blank.

Raised by guardians since the age of six, Turner has overcome a tumultuous childhood, natural disasters and everything in his path to take his place among the very best from from the Louisiana bayous.